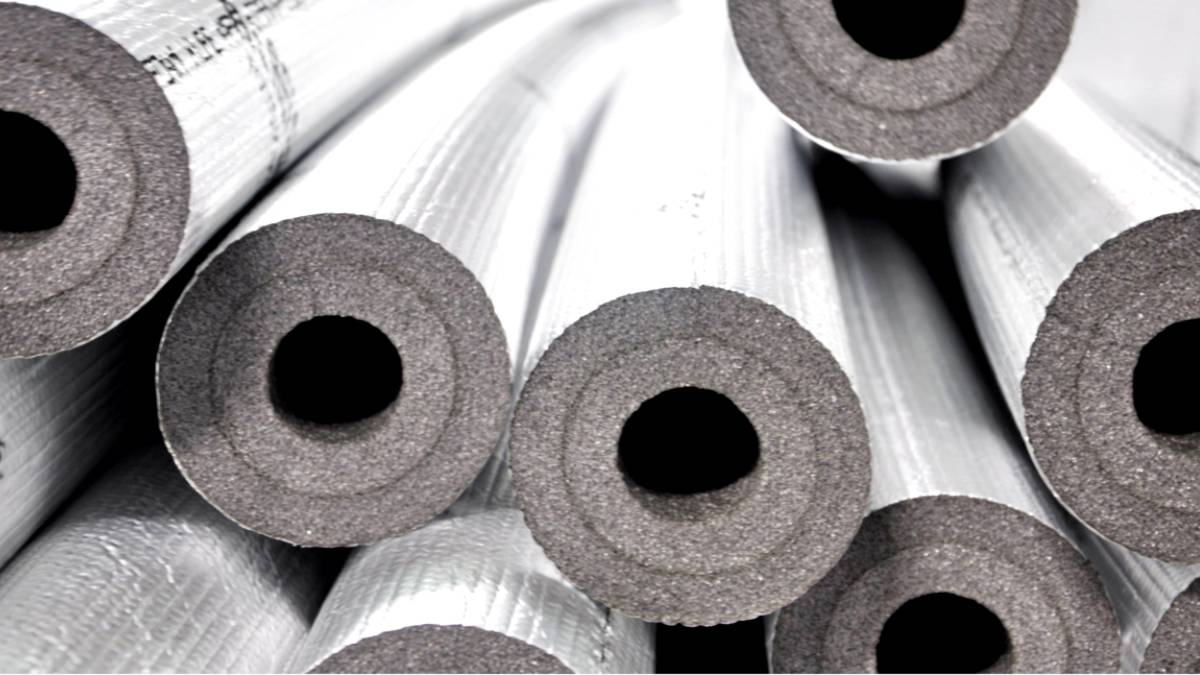 Analysis of these two important aspects within cooling systems.

During the selection of thermal insulation for cooling systems it is very usual to follow recommendations either from the manufacturer or the consultant / designer of the system, perhaps in some cases recommendations are followed in the network, however as a manufacturer and part of the VAC&R guild (Ventilation, Air Conditioning and Refrigeration) my suggestion is to make thermal calculations.

Thermal calculations give clear ideas of how far or close our selection of those recommendations is. In the world of VAC&R there are many standards to do the calculations, one of the most used globally is ISO 12241 Thermal insulation for building equipment and industrial facilities - Calculation method. This particular standard specifies very clear rules for the calculation of thermal systems, an example of its effectiveness is the British standard BS 5422 that specifies the thermal insulation according to certain environmental conditions and location of the systems, this in particular bases the recommendations on calculations made using ISO 12241

Most manufacturers (with presence in Latin America) recommend materials and thicknesses based on previous calculations in general and experiences, however each situation is different from each other, by geographical location that determines the environmental conditions, by design issues, equipment selection, application, selection of materials, type of media, among others.

For the selection of the insulating material the calculations are based on two main objectives: 1) Condensation Control and 2) Heat Gain Control. Which is better?, On which of them should the calculations be based?, What criterion has been used?

Condensation control is calculated using environmental conditions such as ambient temperature and relative humidity and the main goal is to keep the outside surface temperature equal to or greater than the dew point temperature. Properties such as the thermal conductivity of the materials and the Emissivity of the outer layer influence the temperature of the outer surface as well as the wind speed around the system.

To control heat gains in cooling systems such as ice water pipes, air conditioning duct, industrial processes and the like, condensation control is only the first stage, it is very important to control condensation as a preliminary step especially when the insulating material is a water-absorbing material or is an open cell material.

1.- That the safety factor is very low and cannot cover changes in environmental conditions which translates into possible condensation (especially in facilities outside the building).
2.- That the safety factor is very high, which would improve in some way the heat gains but could affect the initial budget, perhaps it is so high that it could be considered useless, to know it you have to determine then the heat gains.

Once the condensation is controlled, the decision must then be made between maintaining the thickness obtained or increasing the thickness of thermal insulation to improve heat gains. To achieve this, it is not recommended to simply select the thickness randomly or selecting the next standard thickness, it is likely that the next one is a waste of money.

As a guide, referring to the graph Condensation Control vs. Heat Gains you can study the behavior of the temperature of the insulated outer surface, the cost of each thickness (for a particular material) and the heat gains for each thickness, the economic and energy impact of increasing the thickness of said material is evident, it is very efficient to do this study and graph these behaviors to make a decision and offer the client a viable solution. This study has been called "Selection of the Optimal Thickness of Thermal Insulation in Cooling Systems". In conclusion, this method determines the best thermal insulation thickness based on price and heat gain. 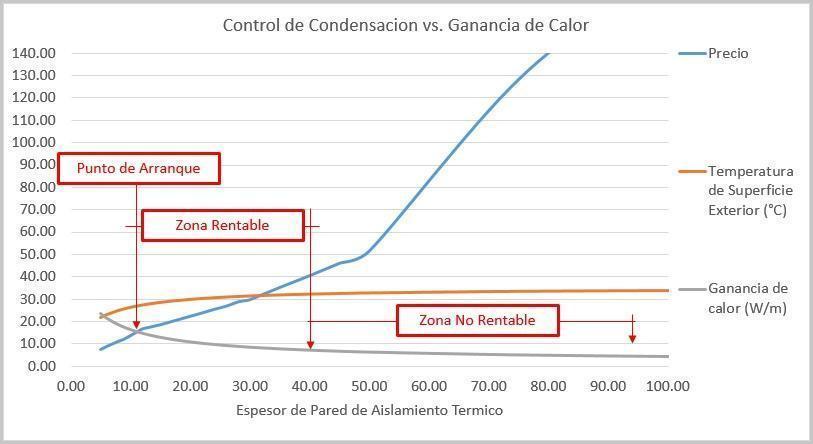 Large randomly selected thicknesses may not always be the best solution, the graph explains how it works. [The graph is just one example, the prices do not correspond to a specific material necessarily, the material referred to for the calculations has low thermal conductivity according to ASTMC 518 and an average emissivity according to BS 5422, the calculations have been based on ISO 12241 for an ice water pipe, carbon steel pipe material of 50.00mm nominal diameter (2") located outside the building, all cases are different, which is why it is recommended to make calculations for each particular case].

The starting point is considered the optimal thickness of thermal insulation to control condensation and heat gains, it is exactly the point where the monetary value and heat gains intersect. This means that if a better thickness is chosen it is likely to control condensation but the heat gain will be so high that it will not support the investment, the ROI will be very slow and depending on the life of the material it may become a very important economic loss. Choosing a much larger thickness could mean controlling condensation and heat gain but it is likely that there is no ROI in the short or medium term and depending on the life of the material there may be no ROI.

On the other hand, the graph shows an area that is called "unprofitable zone", this specifies insulation thicknesses that do not make sense to use them, they are excessively expensive, their installation and transport become expensive and also does not represent an added value to the improvement of heat gain.

How to compare both zones?
An intermediate thickness of each zone is chosen, example 25.00mm (1") and 75.00mm (3"), many times it is believed that increasing the thickness of thermal insulation the system is more efficient, in a way it is, but the cost of 25.00mm (1") is approximately 24.00 UM and that of 75.00mm (3") is approximately 125.00 UM, in relation to price the greater thickness is 5.21 times more expensive, if the project requires 1,000 linear meters then the total cost of those 1,000 linear meters buying both thicknesses has a very significant gap. From the energy point of view, with the smallest thickness a heat gain of 10.00W per linear meter is obtained, however for the greater thickness the heat gain is 6.00W per linear meter.

In conclusion, for this particular case, investing 5.21 times more money (only in material), the system improves only 1.67 times only. In the graph, it is observed that from 40.00mm of insulation thickness the gain curve becomes horizontal, for this particular case it means that although we increase the thickness the heat gain will almost always be the same, there comes a time when it does not make sense to make the thickness larger since instead of adding an energy saving value a cost is added that increases exponentially and makes it very difficult for the ROI to be completed in less time, if the material has a useful or stable life of less than 10 years it is likely that instead of saving investment and achieving ROI very significant economic losses will be achieved. In that case it is recommended not only to do this study but also to base it on the life time of the material.

No thoughts on “Condensation control vs. heat gain”