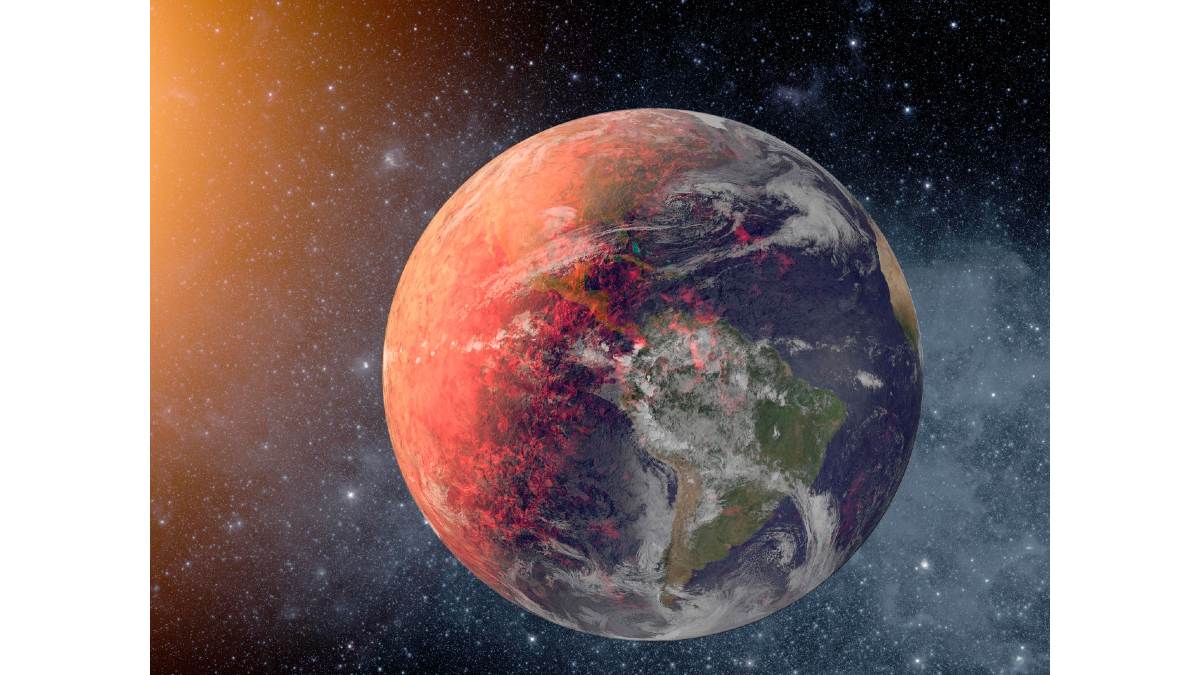 Each of us can help fight global warming.

Global warming consists of the increase in the temperature of the earth, which is reflected in the oceans and mainly in the atmosphere. It is caused by the emission of "greenhouse gases" originated by different activities of humanity that have led to the consequent climate change by gradually increasing the temperature of the atmosphere, which has been observed for more than a century altering the climate system of our planet earth and its effects.

Due to the increase in population, the multiplication of activities and massive emissions produced by human beings in the search for their progress and well-being; Global warming has increased. The increase is mainly due to the burning of fossil fuels along with other processes that emit greenhouse gases and also to changes in land use, such as deforestation, as well as several other secondary sources.

Historically it is known that centuries ago on our planet there was climatic instability and little by little a certain stability was reached that was maintained for some other centuries, but from the first industrial revolution (between 1760 and 1840) the presence mainly of CO2 in the atmosphere was increasing over the years and in parallel the environmental temperature was rising, so agreements had to be made worldwide to take actions to control this "warming" such as the Montreal Protocol with its KIGALI AMENDMENT to gradually reduce the use of hydrofluorocarbons (HFCs) and the PARIS AGREEMENT (COP 21) that involves governments to reduce CO2 emissions thus reducing "the carbon footprint" with the objective of preventing the increase in the global average temperature of the planet from exceeding 2°C compared to pre-industrial levels and also seeks to make additional efforts to make it only 1.5°C.

The following graph shows the temperature trend if these commitments were not met: 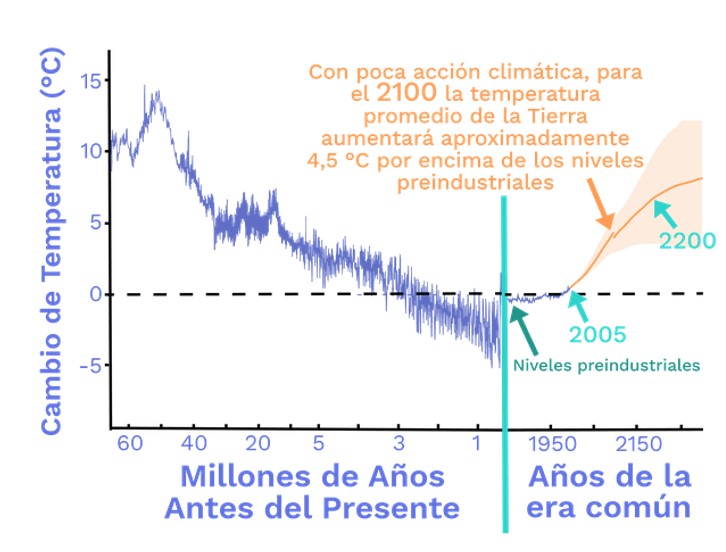 Greenhouse gases
1.-Carbon dioxide (CO2): The natural sources of carbon dioxide emissions are the decomposition of plants and animal matter, natural forest fires and volcanoes. Man-made carbon dioxide emissions into the atmosphere are due to the burning of fossil fuels (coal, natural gas and oil), solid waste, wood from trees and other biological materials. This is because CO2 is produced during the combustion of fuels used in thermal power plants that generate electricity, in addition combustion is the characteristic process of gasoline, LPG and oil engines of most means of transport. It also appears as a result of certain chemical reactions as occurs in the manufacture of cement.

Importantly, carbon dioxide is absorbed by plants as part of their life cycle. It is often thought that deforestation of forests and forests only generates effects in the closest environments; however, the damage that is generated is global because trees have the power to convert CO2 into oxygen through the process of photosynthesis, thereby contributing to reducing air pollution. But if we reduce their number, the concentration of CO2 and other gases will be higher and, therefore, the global temperature will increase.

2.-Methane (CH4): It is emitted during the production and transportation of coal, natural gas and oil. It appears in fermentations produced by anaerobic bacteria found in swampy areas and rice crops. Also ruminant animals, mainly cows and sheep, produce large amounts of methane as a by-product in their stomachs, when they ingest cellulose in their food, which then in their belching and flatulence generate methane emissions into the atmosphere. Another source of methane is the decomposition of organic waste in municipal landfills for solid waste.

3.-Nitrous oxide (N2O): It is emitted during agricultural and industrial activities: such as in the massive use of fertilizers in agriculture, manufacture of nylon and nitric acid. It appears in the combustion of fossil fuels and solid waste, as well as during wastewater treatment.

4.-Fluorinated gases: Hydrofluorocarbons (HFCs) used in refrigeration and air conditioning equipment, as well as perfluorocarbons (PFCs), sulfur hexafluoride (SF6) and nitrogen trifluoride used in various industrial processes are synthetic greenhouse gases emitted by leaks or in various industrial processes. These gases are emitted in small quantities but as they are potent greenhouse gases, they are known as High Atmospheric or Global Warming Potential gases (They have GWP or high GWP). For example, PFCs have GWP close to 10,000 and SF6 has GWP = 22,800.

The following graph gives an idea of the percentage contribution of each of those "greenhouse gases" that produce Global Warming where it is observed that CO2 is the largest contributor: 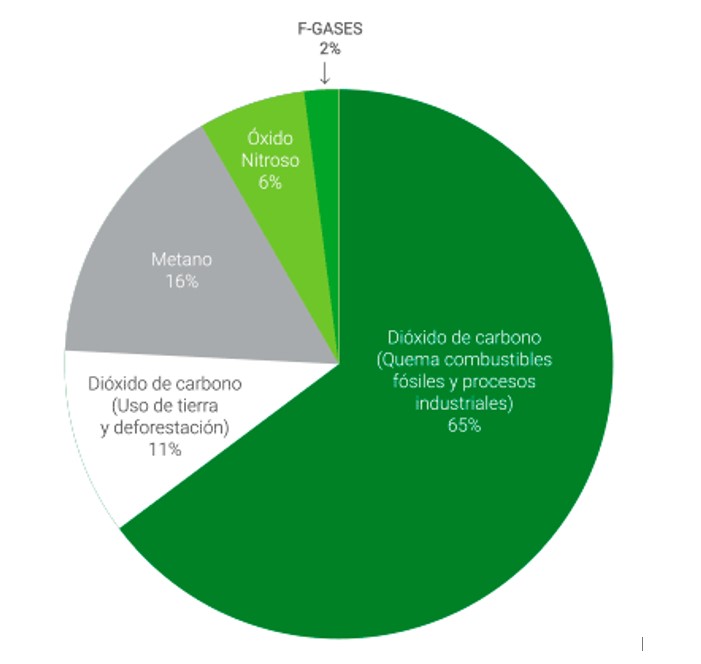 Consequences of warming our atmosphere
Any large or small change in the temperature of the atmosphere alters the balance of our planet and, with it, our quality of life and the future of future generations. Global warming is no longer a problem of the future, it is a current situation that we must control as soon as possible or the destruction of the planet could be irreversible.

The ten most important harmful effects of global warming are:
1. Higher temperatures : The accumulation of "greenhouse" gases causes temperatures to increase more and more and climates to change: this causes droughts and, in addition, increases the risk of fires that lead to deforestation and desertification of the planet.

2. More intense storms: If temperatures are higher, it makes rainfall less frequent, but more intense; Therefore, the level of flooding and its severity will also increase.

3. Spread of diseases: A change in temperature of a few degrees can make the temperate zone more welcoming to the spread of certain diseases. In this way, cases such as dengue or other diseases that are forgotten in developed countries and in areas that have traditionally been colder can begin to occur. The danger of catching malaria can also appear in places located at high altitudes where it was impossible for the disease to exist.

4. Stronger heat waves: Studies show that the North Pole is much "hotter" today than fifty years ago and in many countries today's news shows that the health and even lives of thousands of people may be at risk due to increased heat waves, both in terms of frequency and intensity.

5. Melting glaciers : Oceans with higher temperatures than usual, melt ice caps, global warming also melts mountain ice that have "perpetual snow": this means that sea level would rise, there would be substantial changes in the availability of water for drinking and irrigation, changes in water circulation patterns in oceans and rivers, and the threat to the survival of species of flora and fauna that survive in those ecosystems.

6. More violent hurricanes: The increase in sea temperature makes hurricanes more dangerous because a hurricane is the planet's means of distributing excess heat from warm areas to colder ones. That is why the higher the temperature, the more hurricanes, with all the problems that entail: destruction of houses and cities, of crops, diseases and others.

7. Change of ecosystems: Having higher temperatures, less rainfall, droughts and floods make the climate adapt to this new climatology and, therefore, there are changes in the duration of the seasons, appear patterns more typical of warm climates in temperate zones with the appearance of animals, pests and diseases that previously did not exist in the area.

8. Disappearance of animal species: Some species of animals see how the climate to which they were accustomed disappears and are not able to adapt to changes so quickly. For example, we know that many polar bears are drowning because they cannot reach floating ice, and migratory birds are losing the ability to migrate because they cannot keep up with the temperature flows they are used to.

9. Sea level rise: When the polar ice caps melt, in addition to what is mentioned in item 5, much more water would be poured into the seas and oceans, and therefore, sea level would rise: this is one of the most serious consequences of climate change, since it means that many islands could disappear in the future and that a good number of cities would see how part of their territory would disappear by seeing as its distance to the coast is significantly reduced as would happen very noticeably in the so-called Netherlands of Europe.

10. Rising food prices: Climate change would jeopardize the production of staple foods like wheat, and this means that thousands of people whose lives depend on their crops would be at risk of losing everything. If crops started to decline, prices would rise rapidly. This would affect us all, but in the least developed countries, with very high poverty rates, the consequences can be devastating. In addition, the lack of food and water in the daily lives of human beings would lead to conflicts, wars and migrations of entire peoples who would seek a different destination to find food. 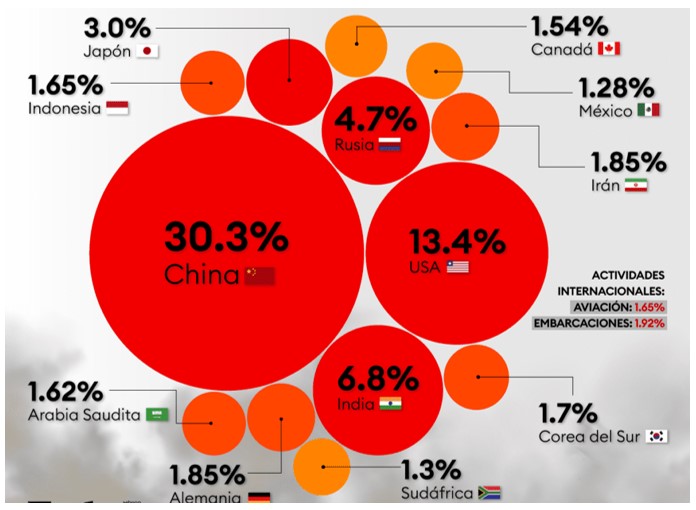 From the graph we can see that all these countries are in the northern hemisphere of the planet and yet pollute the entire earth's atmosphere mixing with the few emissions that we have the countries located in the southern hemisphere. 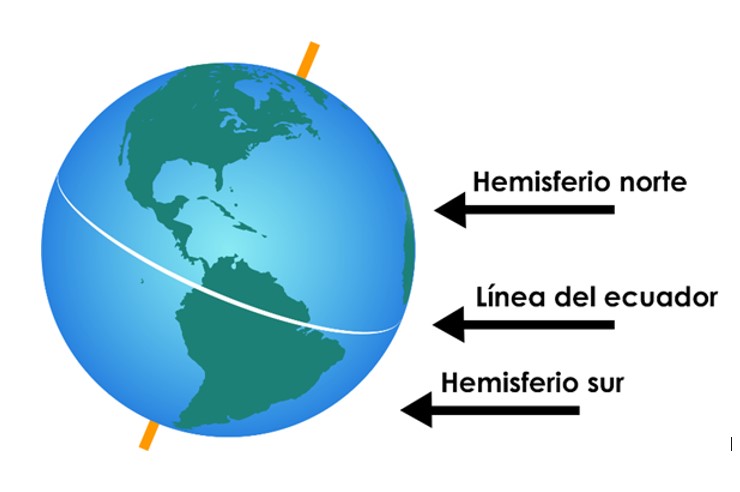 Each of us can help fight global warming
Undoubtedly, the countries of the northern hemisphere are the biggest cause of global warming and have a greater obligation to reduce emissions of "greenhouse gases"; But regardless of that observation, with how much or little we pollute our atmosphere and in the country where we are, we can contribute each of us with our "grain of sand" making us the obligation to take care of our atmosphere so that climate changes do not affect our life, our health, our quality of life and above all the future of our children, our grandchildren and future generations.

Although governments, companies and factories have an obligation and can do a lot to reduce the emission of gases that produce global warming, there are different simple and personal ways to reduce or prevent the increase in temperature on the planet from continuing, such as:
-Lower CO2 emissions: Trying to avoid the use of cars when using bicycles or getting used to walking more. Another option may be to change our conventional car for a hybrid or electric one.

-Reducing electricity consumption: Avoiding leaving lights on and disconnecting electrical appliances when they are not in use, exchanging common bulbs for LED bulbs that have a much lower electrical energy consumption.

-Generating less garbage: When buying a product we must keep in mind if it can be reused or recycled, or prefer biodegradable disposable containers/bags instead of glass or even more plastic. Reducing waste by serving our food moderately and enough to not leave "leftovers" that go to the shredder or trash.

-Trying to find or use electrical energy from non-polluting renewable energy sources such as hydraulic, solar, wind, geothermal and others; according to the resources that each of our countries have or may have.

-If we are related to refrigeration or air conditioning, look for equipment that has high energy efficiency, try to use refrigerants that have zero or very low GWP, make calculations as accurate as possible so as not to oversize the necessary capacity of the equipment, calculate the correct insulation thickness for walls, floors, ceilings of refrigerated environments, As well as pipe insulating hoses and duct insulation, let's use the technological advances that the 4th. Industrial Revolution is giving us to achieve a more efficient control of equipment, among many other things we can do. 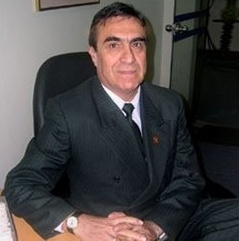 No thoughts on “Do all countries contribute to global warming?”