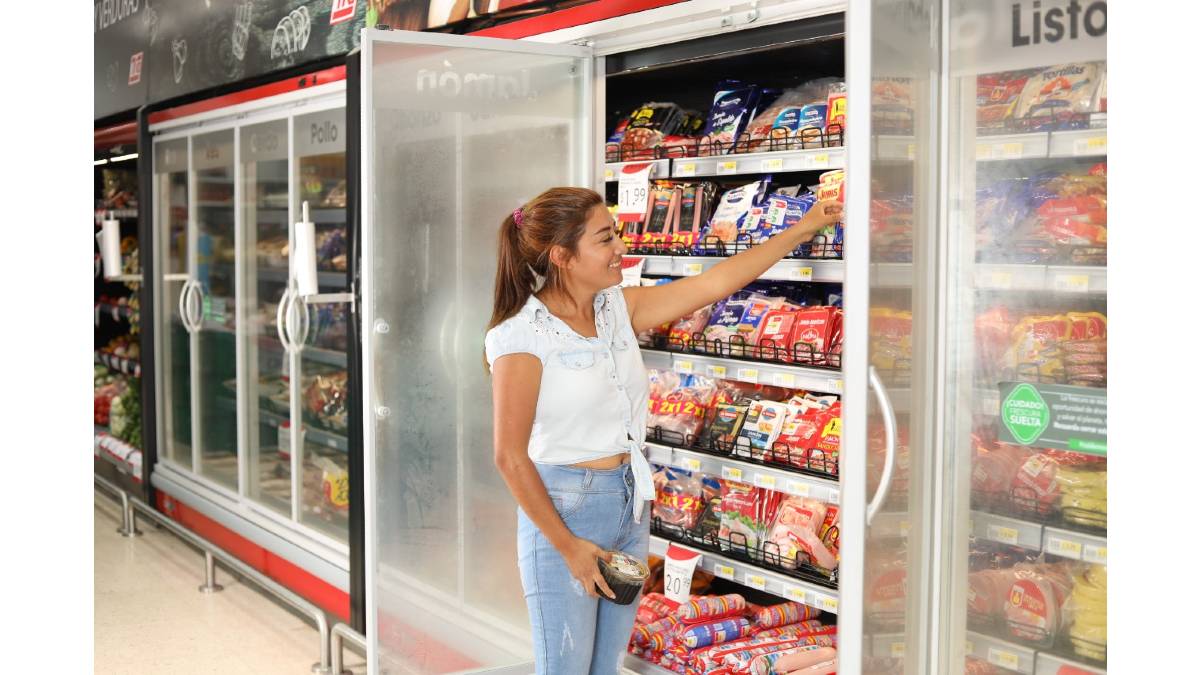 Let's get to know this project in which a booster application was developed for a low-format supermarket.

Background: Given the expansion of large cities, the difficulty in mobilizing, the lack of land to build super or hypermarkets in saturated consumption centers, and also the increase in purchasing power in smaller towns and cities, high discount stores, (called Hard Discount Stores in other countries) and also identified as convenience stores have grown at an exponential rate.

In Colombia, for example, the three main chains of this format open more than 600 businesses per year. These formats are characterized by their size (from 400 to 800 M2), and also by being very often located in sectors or residential neighborhoods, including all social strata, reduced backroom area and restrictions on locating machine rooms to hold the food cold, either by the available space, by the noise requirements of the units, among others.

In addition to the restrictions required to open new stores and especially at that rate, other challenges arise, such as keeping indirect costs as low as possible and this in addition to many other factors, has to do with the cost of energy, so the energy efficiency of the systems is a relevant factor.

Thus, refrigerators, suppliers of the cold network and contractors were forced to propose multiple solutions and all this goes through configurations from condensing units, small systems in parallel, and self-contained systems among others.

In addition, maintaining the challenge of having redundancy in the system to preserve the stability of the cold chain, using the least possible space in the engine room, especially in the location of the condensing units, and simultaneously in the face of the need to be able to regulate the cooling capacity to the extent that the thermal load, forced to think of a compact system of high efficiency and that can handle the two typical temperatures of a store of this type (medium temperature: 14 F, fruits vegetables drinks cold meats among others and those of low temperature – 25 F, such as frozen products, meats, ice cream pulps, etc.), and is where in Ecuador through a local manufacturer (Megafrio) faces the challenge of innovating and appropriating a concept that although it is not innovative from its theoretical conception it is from its simplicity and combination of solutions.

Theoretical concepts
Booster systems have been used for years in multiple applications, especially when it comes to having very low evaporation temperatures, where the option of doing so in one stage would generate, not only high discharge temperatures, but a high inefficiency derived from the natural effect of reexpansion of the gas in the dead space of the compression chambers in the compressors, which dramatically penalizes volumetric efficiency.

In recent times, with the challenges of systems with low GWP, they again resume their importance, especially for their use in systems that use C02 as a refrigerant, as shown in Figure 1, which to reach low application temperatures are configured with two compressors (or groups of compressors) and with this same refrigerant they are attending to the average temperature (14 F) and the needs in low temperature (-25 F or less inclusive). 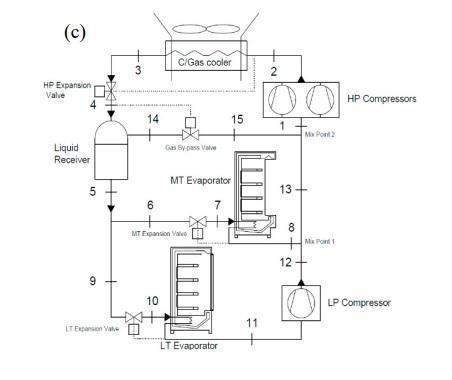 Advantages
Given the above, Megafrio, with its Innovation and Development team address the challenge of a system that, taking into account the new demands of the market, can offer a system that can simultaneously:

• Meet the needs of Medium and Low temperature in a single system.
• Use little space because it is compact and integrated into a single structure. ( Figure 2 and 2a ).
• Dissipate its heat remotely and thereby locate the unit inside the refrigerator, thus solving the difficulties, cost overruns and implications of manufacturing technical slabs on roofs or in areas adjacent to the refrigerator or point of sale.
• Be located near warehouse areas, offices, or even near the point of sale, for the design and technology of Scroll compressor that it uses and also for its acoustic insulation, confined in a closed piece of furniture.
• Provide back-up option with redundancy in the number of compressors due to the event of an untimely failure.
• Use Digital Scroll compressor technology that allows modulation from 10 to 100% thus providing a combination of high energy efficiency, modulation system with better control of evaporation temperature, with reduction of food waste, in refrigerated furniture due to its high precision in the temperatures of the refrigerated product.
• Maintain redundancy in the electronic components and with it before the possible and remote possibility of a control failure, the backup system is available, also electronic.
• Since much of the system's efficiency is derived from Booster technology, where low-temperature compressors condense with the medium-temperature evaporation portion, the system provides the option (in the event of a failure in the low-voltage system) to be able to work as a conventional "Split Suction", that is, each group of compressors working independently of a common condenser.

Figure 2. Final appearance of the Megabooster and its control and automation board. 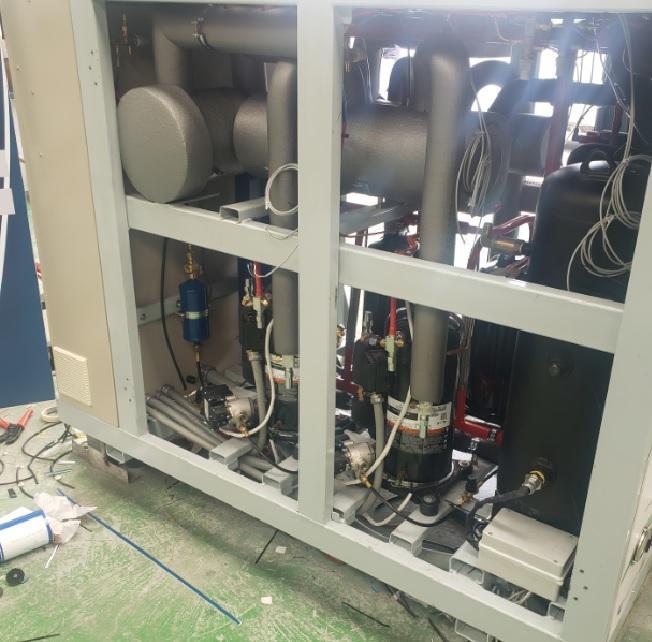 Technological innovation
The challenge of the project that was implemented within the aggressive growth plan of TIA Supermarkets in Ecuador, which not only consisted of being able to offer the advantages described above, but at the same time, while maintaining the safety conditions of the compressors in terms of oil return issues, using electronic level control valves, likewise the non-return valves (check valves) at the specific points, to allow the option of working independently and also avoid returns and flow by-passes from one system to the other.

The diagram in Figure 3 shows in a simplified way the scheme of technological development, where in addition to the above it is combined with EVI technology, which stands for Economized Vapor Injection. This technology that acts as an economizer allows that through plate exchangers and an electronic expansion valve the liquid can be subcooled from 110 F to 28F, thus obtaining an increase of more than 25% in the refrigerant effect of the compressors, and the aforementioned greater efficiency of the set.

Being able to have subcooled liquid not only translates into high efficiency but also forces a resizing of the liquid lines of low-temperature systems that due to their smaller size translate into a lower refrigerant load.

The refrigerant steam produced in these exchangers is connected to the medium temperature compressors, thanks to an intermediate port that cools the discharge gas of its first stage.

Summarizing all the advantages in the following items: 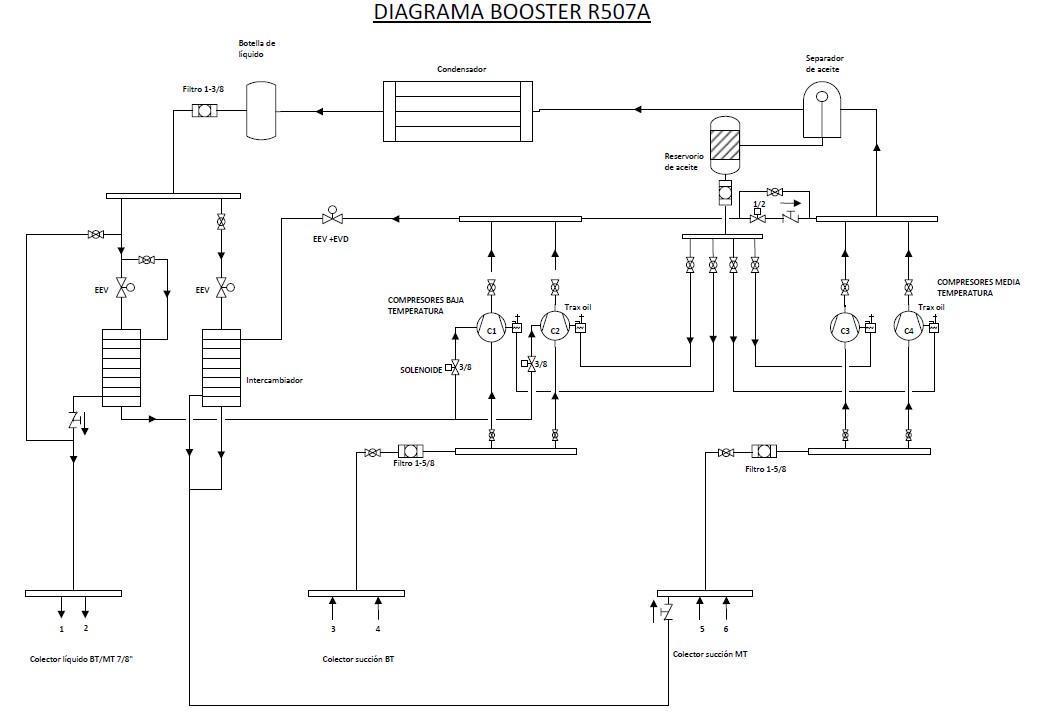 Figure 3. Schematic diagram of the Megabooster.

The graphs in Figure 4 and 4a show the behavior of the suction and discharge pressures, both in the low temperature group and in the mean group. There is still much to be done in adjustments, calibration and thus get the most out of the system, but in fact, having condensations of the order of 110 psig (with 507ª) in low temperature compressors foresees significant savings added to those derived from modulation and the economizer for subcooling of liquid lines.

There is still much to innovate, new refrigerants are to come and even in tests, butarchitectures of this type added to lower refrigerant gas load and high levels of efficiency are expected to be the solutions to the challenges of climate change and low environmental impact. 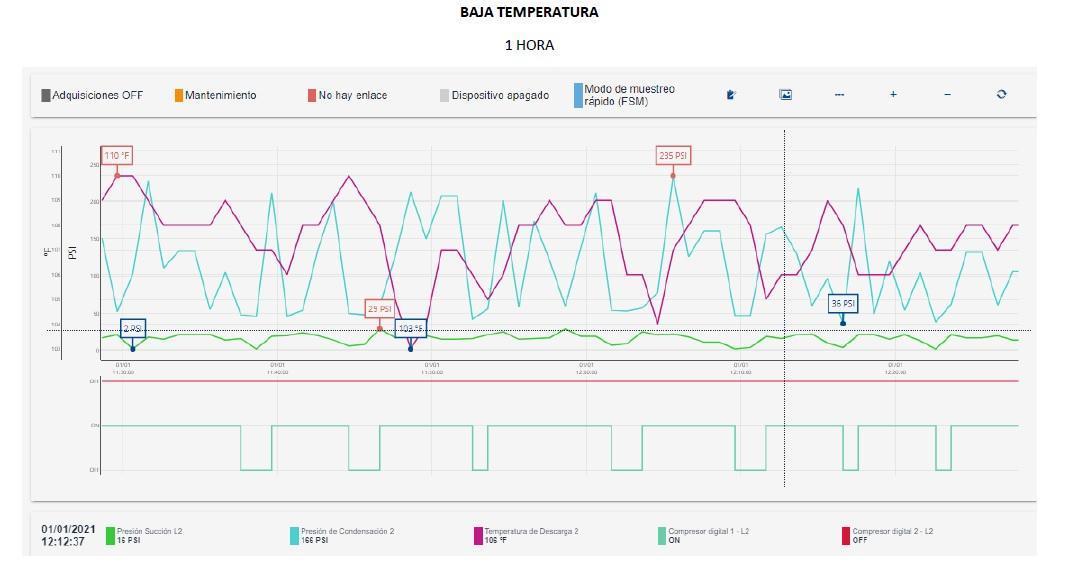 Figure 4. Behavior of pressures in the low-temperature suction group. 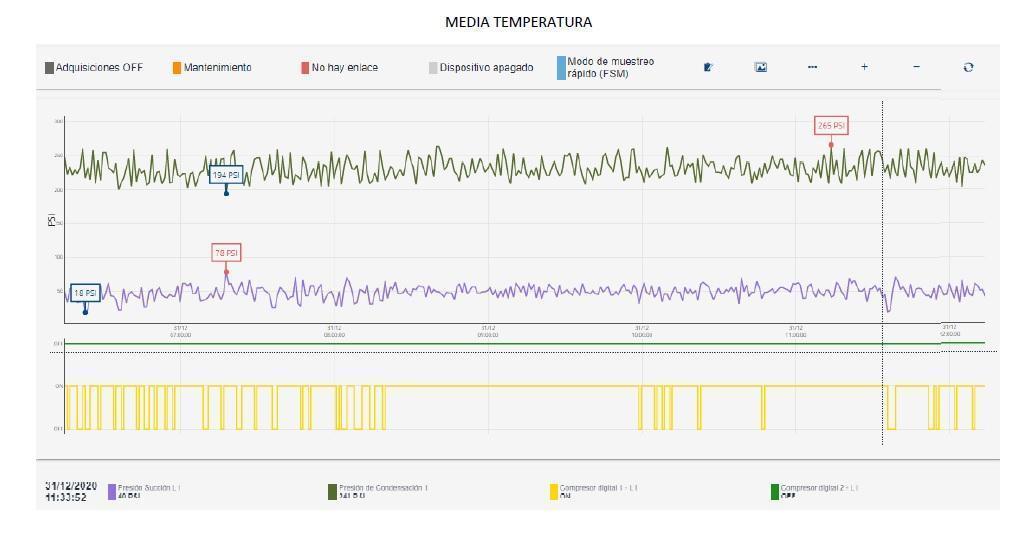 Figure 4a. Behavior of pressures in the suction group of medium temperature.

3 thoughts on “Development of a booster application ”