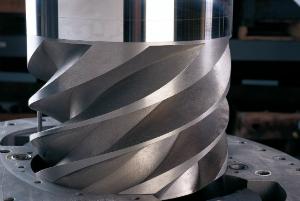 In the fourth chapter of the special on compressors, we come to the concept of the single-screw compressor, a system that is no longer considered as experimental but as a proven technology. by Germán Robledo*


The single-screw compressor is a rotating, oil-injected, positive-displacement machine. It comprises a central helical grooved screw, with a pair of gate rotors with flat star-shaped teeth on the sides (see figures la and lb). The gate rotors are engaged with the screw and form a wall or seal of the compression chamber. The single screw can be thought of as two compressors in one, since each side of the compressor functions as a separate compressor. By a revolution of the screw, the compression and discharge cycle occurs on both sides of the machine. The result of this two-sided compressor is that the radial forces on the screw, due to the pressure of the gas, are balanced. In addition, the discharge side of the screw incorporates a labyrinth seal that allows both the suction and discharge ends of the screw to be maintained at the suction pressure. In addition, the forces of the gas inside the screw propellers do not produce unbalanced axial loads. As a result, axial loads are kept to a minimum. In this way, the bearings for the screw have a light load, which translates into a long life cycle. The bearings on the gate rotors carry an eccentric axial load due to the pressure along the blades of the gate rotors that are engaged with the screw. However, these loads are also relatively light, providing a long life cycle to the bearings of the gate rotors. The lubrication of the bearings in the single-screw compressor is simplified by the fact that all bearings are located in low-pressure regions. This means that they can be lubricated without the need for an oil pump. The pressure difference along the compressor from suction to discharge is adequate to provide the required oil flow to the bearings. Gate rotors are produced in two pieces comprising a floating part of lightweight compound and a ductile iron support to transport the loads. (See Figures 1a and 1b.) These two parts are not rigidly fastened but can rotate relative to each other within the limits of a torsional damper, hence the term "floating gate rotor" for the lightweight composite part. The reasoning behind this design is to reduce the driving forces between the screw and the gate rotors. 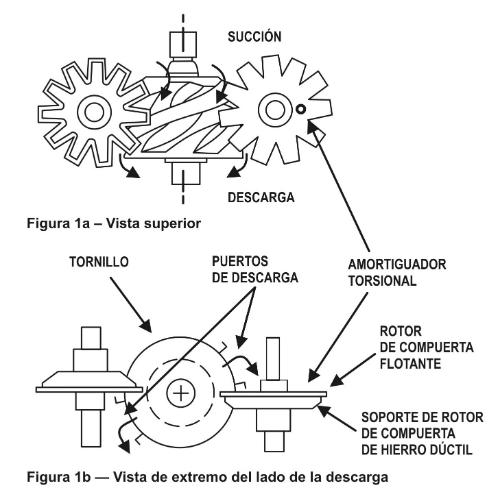 By driving the massive part of the gate rotor through a torsional shock absorber (spring), accelerations during start-ups and stops do not produce large driving forces between the screw and the gates. This is important for the service life and reliability of gate rotors. Also inherent in the single-screw compressor is the minimal torsion transfer (and thus minimal driving forces) between the screw and the gate rotor during constant speed operation. The forces required to drive the gate rotors are only due to friction in the bearings and viscous drag of the oil. Gate rotors do not have to overcome differential gas pressure forces in the direction of rotation. The screw is machined, made of high quality cast iron. This, combined with the plastic composite gate rotors, results in low wear characteristics when combined with the hydrodynamic lubrication provided by oil injection. The screw has six grooves and each gate rotor has eleven teeth attached. This results in a rotational speed for the gate rotors of 6/11 times the rotational speed of the screw. The primary reason for this combination of grooves and blades is for the "search" for the action of the teeth, that is, each blade of the gate rotor is successively engaged with each groove of the screw. This eliminates the need to selectively combine a particular gate rotor blade with a particular screw slot during assembly.


As in a twin-screw compressor, the single screw requires closed operating settings for sealing. This, in turn, requires very precise machination of key components. Oil injection is used to seal the settings, lubricate the moving parts and cool the compressor discharge. The single-screw compressor, similar to the twin-screw compressor, works with suction and discharge ports, eliminating the need for valves, such as those used in a reciprocating compressor. In this way, the machine operates with an integrated volume ratio, which must match the pressure conditions of the system for efficient operation. Sliding valve
Current technology for capacity control comprises a slide valve for each side of the compressor that controls the size of the discharge port and the size of the capacity discharge port (see Figure 2). In addition, there is a fixed discharge port (usually tuned for an integrated volume ratio of about 5.0) to ensure a minimum area of the discharge port when the slide valves are fully moved to the end of the machine discharge for minimal capacity. 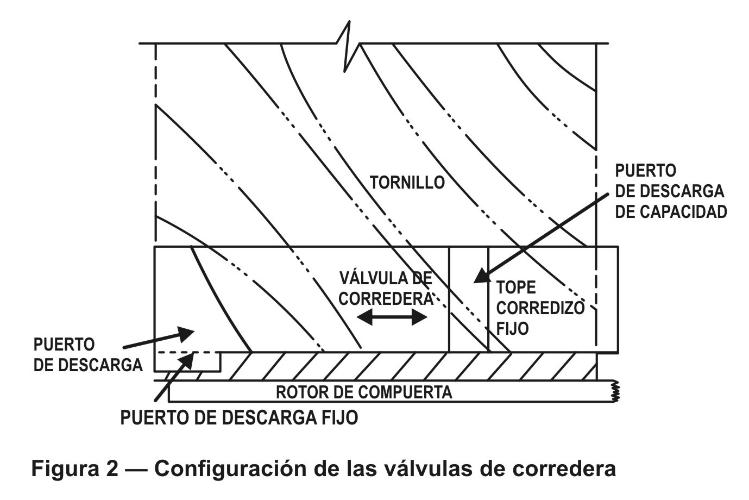 The principle of operation of the slide valve is similar to that of the double screw in axial motion but in opposite results of efficiency. As the slide valves move in the discharged direction, the low-pressure end opens a passage into the suction chamber, thus lowering the capacity of the compressor. The starting point of the compression moves with the low-pressure end of the slide valves. As the capacity is reduced, the discharge end of the slide valve moves to the end of the compressor discharge, almost maintaining the integrated volume ratio. However, in a twin screw, once it is below about 95% of the capacity, the volume ratio can no longer be maintained. A rather abrupt drop in volume ratio below 95% capacity results in rather poor performance at partial load of twin-screw compressors in general. This unique situation occurs in twin-screw compressors. An advantage of the single screw over the double screw is its flexibility in discharge schemes, due to the fact that the single screw has two slide valves, one on each side of the compressor, for a total of two.  For this reason, some manufacturers have chosen to discharge the compressor asymmetrically, a technique by which a slide valve is actuated until the corresponding side of the compressor is completely discharged. The other slide valve remains at full load. As one side is completely discharged (0% capacity, 0% BHP) while the other is at 100%, the partial loading efficiency at 50% is much better with respect to symmetrical discharge (both 50% slide valves) or double screw (with a single slide valve) at 50%. However, asymmetric discharge also has its disadvantages. First, operating two slide valves independently requires twice as many drive components, which increases costs. Secondly, with one side of the compressor running at full load and the other without load, there is an unbalanced load on the screw rotor. This requires an additional bearing to carry the imposed radial load. Although this load can be easily handled by a roller bearing, there is an additional cost and a small reduction in reliability due to the additional component. To do this, the symmetrical loading method is then chosen and both sides of the compressor (upper and lower) are discharged, returning the virtue of balance or balance of forces.


The single-screw compressor falls into a capacity range similar to that of the twin-screw compressor. Precise machining requirements with tight tolerances are costly, making it difficult to compete with the reciprocating compressor economically. This same situation occurs in twin-screw compressors. However, as the swept displacement of the screw mono is proportional to D3 (where D is the diameter of the screw), a small increase in diameter produces a large increase in capacity. For example, a 240 mm compressor displaces 580 ft3/min. To double this number to 1160 ft3/min requires a 300 mm compressor or simply a 25% increase in screw diameter. In the medium and large size range, this results in a very compact machine. The higher end of the capacity scale is mainly limited by the peripheral speed of the screw. 65 m/sec. (meters per second) is considered the maximum for considerations of efficiency, reliability and noise. For 3600 rpm, this limits the mono screw to 3000 ft3/min with a screw diameter of 350 mm. A compressor like that, then, could handle capacities of up to 3600 ft3/min. The single-screw compressor is an important force in the market for its potential for reliable and efficient operation. In addition, when using the latest machining technology, your costs must be extremely competitive with other types of compressors.

* German Robledo is a Mechanical Engineer. He has 15 years of experience in the industrial refrigeration industry, was manager of after market and services for the north of Latin America in the company York Refrigeration and is currently the sales director for Latin America of the company Vilter Manufacturing - Emerson Climate.

No thoughts on “Single screw compressor”