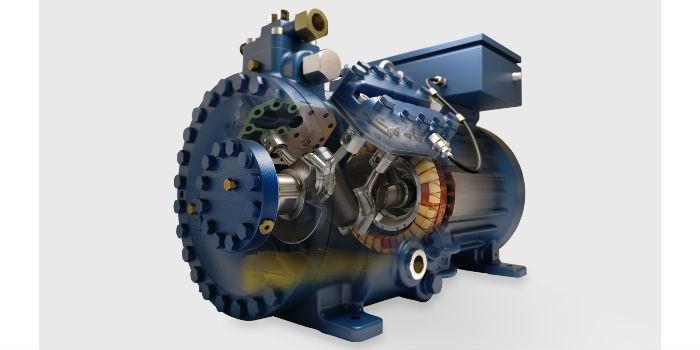 One of the refrigerants that is getting more market is CO" and therefore it is important to know deeply its characteristics to make the best choice.

The Bad
Carbon dioxide is considered a greenhouse gas, which absorbs and emits infrared radiation.

Solar radiation at frequencies of visible light passes mostly through the atmosphere to heat the surface of our planet, some of that energy is absorbed by the surface and part is emitted at lower frequencies of infrared thermal radiation out of the planet.  For thousands of years that balance was maintained so that the average temperature of the atmosphere remained unchanged and as we know with very defined seasons throughout each year according to the geographical location. The incoming solar radiation in the atmosphere must be compensated by the outgoing radiation, because if the incoming radiation is greater than the outgoing radiation, global warming occurs and if the opposite happens, global cooling occurs.

However, the activities that have led to human development and progress since the Industrial Revolution, mainly with the burning of fossil fuels, felling of trees and burning of forests, are unbalancing the exchange of heat causing the so-called "greenhouse effect" or "global warming".

The "greenhouse effect" is a process by which thermal  radiation emitted by the earth's surface is absorbed by atmospheric greenhouse  gases (located at the height of clouds) and re-radiated in all directions. Some of this radiation is returned to the surface and the lower atmosphere, resulting in an increase in the average surface temperature compared to what would be in the absence of these gases.

Most specialists indicate that the increase in the atmospheric concentration of CO2, and therefore in the CO2-induced greenhouse effect is the main reason for the increase in global average temperature since the middle of the last century. The main greenhouse gas responsible for the warming is CO2 but methane, nitrous oxide, ozone, and other gases also contribute, including refrigerants that we use in refrigeration and air conditioning equipment. CO2 is the most worrisome, because it exerts a greater influence on warming than all other gases combined, and because it has a long life. It is estimated that the mass of CO2 emitted into the atmosphere: about 50 % will take 30 years to disappear, 30 % will remain a hundred or two hundred years and the remaining 20 % will last several centuries.

That is why corrective measures are being taken through the much-talked about Kyoto Protocol.

The Good
CO2 is so common and frequent in our lives that many of the things we consume and do in our day to day, we do not know or do not realize that they work or are made  with this compound:

It is used as a fire extinguishing agent because it makes it difficult for flames to contact the oxygen in the air.

In the food industry, it is used in carbonated beverages: soda, beer, champagne. Also to preserve vegetables in controlled atmospheres and as "dry ice" to preserve ice cream.

In medicine: insufflation agent in laparoscopic surgeries, contrast agent in radiology of blood vessels, in CO2 laser, treatment of cranial wounds and ulcers, aesthetic treatments, treatment of circulatory problems. As "dry ice" it is used for the long-distance transport of biological specimens, for cryopreservation, for the storage of blood platelets without the need for the use of electromechanical freezers.

In agriculture, it can be used as fertilizer: plants cannot absorb it by the roots but it can be added to lower the pH, avoid lime deposits and make soil nutrients more available . As an agent of insensitivity of pigs or  chickens, those that before being slaughtered are exposed to CO2. There is no residue left in the meat.

It is used to create artificial fog and boiling water appearance, in special effects in film, television and shows. Also in refrigeration it is used as "dry ice" for the preservation of some frozen products and as a cooling fluid in refrigeration machines by steam compression.

Refrigeration use
Damage to  the Ozone Layer and  Global Warming have led the world of refrigerants used in  refrigeration and air conditioning equipment to take a new direction through so-called "green refrigerants". Among them is CO2 that is presented as a novelty and therefore many people believe that it is a new refrigerant but it is not so.

Around the year 1,750 CO2 is identified as a substance distinct from air because the Scotsman Joseph Black observed that the calcium carbonate present in limestone, when heated, produced a gas he called "fixed air". That "fixed air" or carbon dioxide was denser than air and did not serve to achieve or maintain fire. It was later found that carbon dioxide, now carbon dioxide, is produced during animal respiration and fermentation.

Around the year 1,772, the English chemist Joseph Priestley published a paper in which he describes a process of dripping sulfuric acid on the chalk to produce carbon dioxide, that gas he passed through water contained in a container and stirring the container so that there is more contact between water and  gas, he obtained water with tiny particles of gas distributed in its bosom. He had inadvertently invented carbonated water.

The application of carbon dioxide in refrigeration systems dates back many years:

Phase diagram
It is important to know the behavior of CO2 and therefore it is interesting to compare it with a  fluid with which we are very familiar: water. 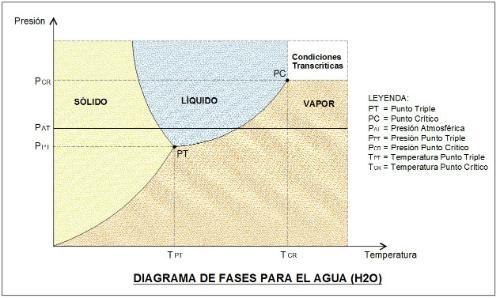 It is also observed that its Critical Point is at very high pressure and temperature, being difficult to reach at normal conditions of use.

The graph also shows that the saturation curve separating the Solid-Liquid phases has a slight slope to the left. It is the exclusive behavior of water because any other substance that exists in nature will have a slope to the right as we will see for CO2.  Thanks to that property is that  you  can only "skate" on the water ice. 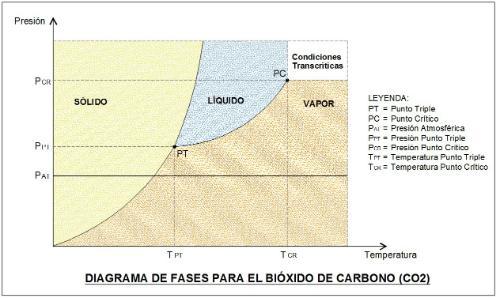 It is observed that at atmospheric pressure we can pass directly from solid to vapor (Sublimation process) as the temperature increases, because its Triple Point is above. It also tells us that care must be taken when handling it in equipment because it easily goes from liquid to solid (dry ice) in low temperature applications. 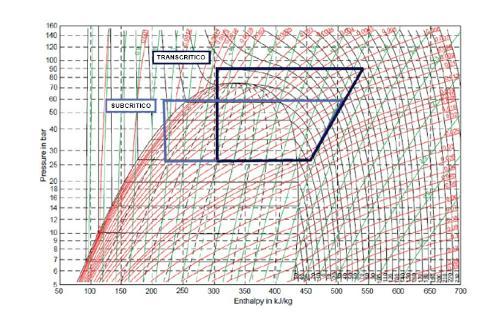 For countries with high  and relatively high environmental temperatures, which are approximately between the parallels 40° North latitude and 35° South latitude, it is advisable to work with Subcritical cycles so as not to exceed 31°C of condensation temperature of CO2 or refrigerant R-744 according to ASHRAE nomenclature.

As a reference we show schematically the use of CO2 or R-744 as a secondary refrigerant "cooled" by another refrigerant to be pumped as a liquid is an application where the evaporator becomes a cooler. This is only used in medium/high temperature applications. 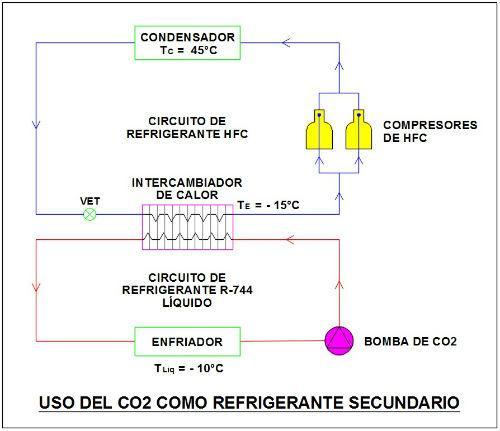 Image 4
Also, as a reference we show schematically the use of CO2 or R-744 as a secondary refrigerant "cascade" with another refrigerant to meet a subcritical thermodynamic cycle. In this case the R-744 evaporator is  used for medium/low temperature applications. 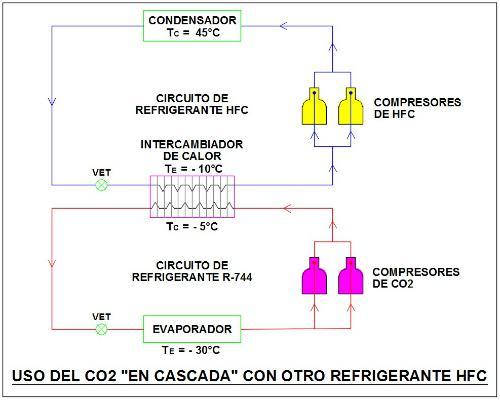 Image 5
When using parallel compressors or compressor racks that allow the system capacity to vary or one of the compressors is "Inverter"  or "Digital" it is better to use electronic expansion valves instead of thermostatic expansion valves because they modulate the flow of refrigerant and accommodate tea load variations. Rmica achieving great energy savings as a whole.

Supermarkets are taking advantage of these refrigeration systems very well, being able to combine both systems explained.

* Ernesto Sanguinetti R. is the Manager of the Engineering Division at Cold Import S.A in Lima, Peru. You can be contacted via email [email protected]

No thoughts on “The bad and the good of CO2”