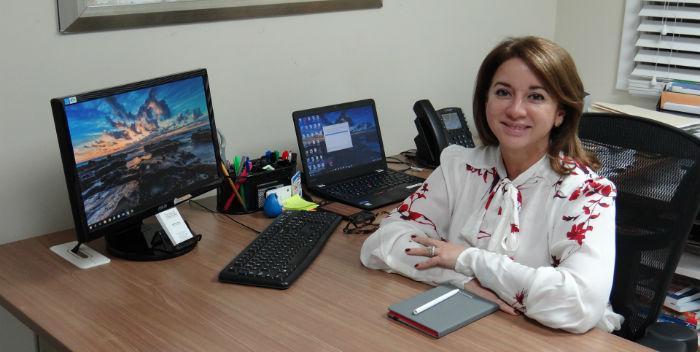 Our Professional of the Month is Gianna Solís, General Manager of Boreal International.

In an industry where the presence of the male gender predominates, having the possibility of knowing life stories of women who have fought hard to make an important space, will always attract attention.

That is why this time we want to highlight the work of a woman leader, to whom no one has given anything and who now occupies an important space in the HVAC sector, for knowing how to win the trust of those who believed in her and for having done things correctly throughout her professional career.

She is Gianna Solis, current general manager of the distribution company Boreal International, which is headquartered in Miami, but whose distribution focus is directed at the Latin American market. Gianna leads a fairly young company, which in a few years has managed to open an important space within such a competitive area.

Although it may not seem like it, because she is a charming woman and quite young, Gianna has a trajectory of more than 25 years within the industry, and today she recognizes that she is a reference that opened doors to other women in the sector.

How you made your way into the industry
Gianna trained in Puerto Rico, studied mechanical engineering and began working for a firm of consulting engineers in air conditioning. She says that the air conditioning came to her by chance, because when she took the elective course in this area, she did not think that this was going to be her future.

After a year of experience he came to Carrier. "I can tell you that at that time, in the 80's, there was no female engineer in the major air conditioning distribution companies in Puerto Rico, and Carrier gave me the opportunity to work in the commercial department with all the engineers. Something not very common at that time," Gianna said.

She had to break barriers, prove that she could, and to help herself, she began to get involved in the design area, which allowed her to meet all the consulting engineers and mechanical contractors of Puerto Rico, in addition she was encouraged to participate in union activities within the local Association of Mechanical Contractors and in ASHRAE. After five years she was appointed manager of the commercial department.

In total, Gianna worked at Carrier for 22 years, of which the first eight years were spent in Puerto Rico. He later traveled to Miami to manage the strategic accounts. "My job was to open strategic accounts in the United States and Europe that were investing in Latin American countries and channel the sale of Carrier systems through Carrier's offices for each territory. That was my job for 3 years, then I moved to Venezuela to work as a sales and marketing manager."

After his time in Venezuela, in 2001 he returned to Miami. "Carrier transfers the territory of Venezuela to Miami and I move to the CIAC office to work in Central America, the Caribbean and the Andean countries. I work there until 2007," explained the guest.

In that same year comes a new challenge. "I moved to California and it was something very different because it was my first experience in the domestic market, also in a company that Carrier decided to open from scratch and where they were looking for people to measure that challenge. I left as a brand manager for Carrier dealers. It was a big challenge, because we started a company and then grew to 23 points of sale and almost 300 employees," said Gianna.

His history with Carrier changed in 2009. The manufacturer makes the joint venture with the distribution company Watsco, for the southern states of the U.S. but California was not included in the business, something that occurred a year later. At that point, our Professional of the Month makes an important decision for your career.

"After that, I had to think about whether to continue with the new company, but I decided to leave. I felt uncomfortable at that time and I began to think about what to do, I even considered changing professional turns and did interviews in other sectors, but I realized that my thing was air conditioning, and I decided to stay in what I like, although in a freer way. "

Then he decided to venture into the world of business consulting, and in 2010 he did a job for his first client: Watsco, for a very interesting project. "They had just achieved the exclusivity of the Gree brand for North America and Puerto Rico and my project was to develop the line and locate the brand within the country through various distribution channels. It was also to start from scratch and put the mark on the map. I spent three years in that process," explained the professional.

The birth of Boreal
It was already the year 2013 and at that time Watsco decides to open Boreal. Gianna arrived in Boreal and started working at a table together with four people in the office of Gemaire Distributors (a subsidiary of Watsco), a company that had an export department which became Boreal, where the strategy was improved, the staff was increased and the product portfolio expanded.

Today, Boreal has grown a lot and "thanks to our growth in such a short time, the building where we are today is already small and that is why we moved in February to a space with larger offices and warehouse," he said.

With everything that happened, Gianna understood that she was destined to start up companies that were just starting out, something she became an expert at. "With Boreal, I first thought it was karma to open new companies, but it's definitely something I really like. I know it's very difficult to start from scratch, especially in a company that wants to see start-up results, but when time goes by and you look back, you feel a lot of satisfaction. I know that today I could be calm if I leave, because I have a good team."

Now, Gianna is still looking to further consolidate the company. "The vision we have is to look for new opportunities, to be alert all the time to which new markets we can enter, which line we can add and / or represent in different markets; of course, without losing what we have gained, because we have been growing from the inside out," he explained.

The leadership of Gianna Solís is characterized by always being attentive to all the movements that are made within the company and knowing how to lead its work group. "I'm very involved in everything that happens in the business. For me this is very important in a company that is just starting out. My strength is the strategic part of the business, it is something that I love and in that I guide my group a lot. I share my vision and strategies with them and they execute. The communication here is very open, my style is to work together, it is simple but it works very well."

Business Vision
Our guest knows that the competition within the market is increasing, and that is why she creates strategies to remain current and grow at the same time.

"The business is not easy, there is more competition, the barriers to entry in the Latino markets are minimal, and that means that the standards are not so high and that there is unfair competition; they are difficult markets, however, we find our space in the market, and Boreal works with an entrepreneurial spirit that allows us to reach all types of customers and offer our range that is increasingly wide. We differentiate ourselves with service, the experience of the professionals and our lines that are of quality and prestige".

A new challenge
In addition to the general management of Boreal, Gianna has just assumed the vice presidency and general management of the company Tradewinds, a subsidiary of Watsco. Tradewinds is Gree's exclusive distributor for the United States. "Boreal and Tradewinds are two companies of similar size, but with very different strategies and challenges. The goal is to continue the strategic growth of the two companies and manage synergies in certain areas of the business," concluded our guest.

No thoughts on “Gianna was born for new challenges”