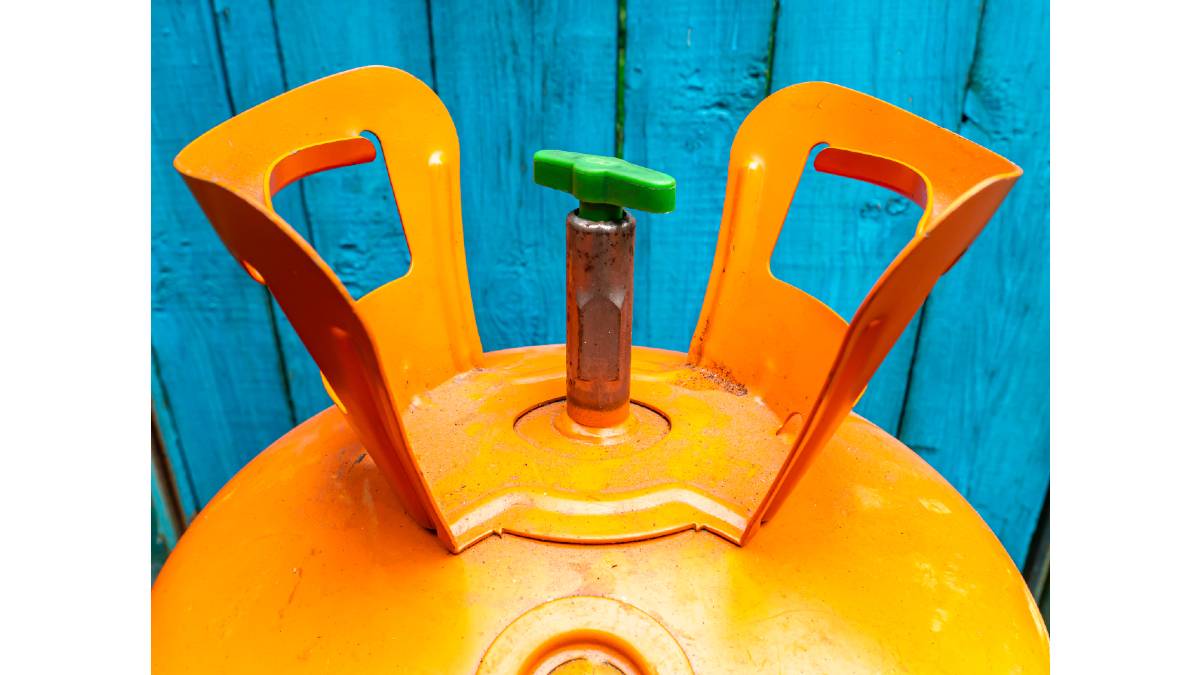 Analysis of the current situation and future scenarios of refrigerants for AC/R in Latin America.

All alternatives with the aim of not destroying the ozone layer (ODP = ODP = 0) and at the same time not producing global warming (GWP = GWP = GWP = 0 or very low).

Therefore, there are currently 3 trends that seek to reduce / solve these environmental problems caused in greater or lesser proportion by refrigerants:

Natural refrigerants
Natural refrigerants are chemicals produced by nature's biochemical processes. They are substances that are naturally present in our atmosphere (biosphere) that do not destroy the ozone layer (ODP = 0) and have very low or no global warming potential (GWP ≈ 0).

The main natural inorganic refrigerants used in the past and now being reused in industrial/commercial refrigeration are ammonia (NH3 or R-717) and carbon dioxide (CO2 or R-744). Water (H2O or R-718) and air (R-729) will continue to be used primarily as secondary refrigerants.

The natural organic refrigerants that are increasingly being used in commercial/domestic refrigeration and air conditioning are hydrocarbons (HC) such as propane (C3H8 or R-290), iso-butane (C4H8 or R-600a), propylene (C3H6 or CH2 = CH - CH3 or R-1270).

Ammonia has very good thermodynamic properties and hydrocarbons good thermodynamic properties so when used they have resulted in energy-efficient systems. But (there is always a but) they present concerns regarding safety (toxicity and/or flammability) which is why ammonia is used in medium and large industrial systems, while hydrocarbons are used for small and medium applications with low weight load.

On the other hand, carbon dioxide is a safe refrigerant (non-flammable and non-toxic), but it works with very high pressures and also has a very low critical temperature; however, the technology currently developed is allowing it to be a viable alternative in many applications traditionally dominated by synthetic refrigerants such as food cold systems in supermarkets (using subcritical or transcritical systems).

As a reference we show some properties of natural refrigerants where the critical pressure is in Absolute Bar:

Synthetic refrigerants
Synthetic refrigerants owe their name to the fact that they are obtained by chemical synthesis process carried out in laboratories. Chemical synthesis is the process by which chemical compounds are produced from simple compounds or "chemical precursors." From molecules that exist in nature, molecules are obtained that do not exist in nature, that is, new substances useful for man are created.

In the simplest cases, the synthesis reaction takes place when two different atoms or molecules interact to form a distinct molecule or compound. Most often, when a synthesis reaction occurs, energy is released and the reaction is exothermic. However, there are some that are endothermic.

The synthesis to obtain chlorinated and fluorinated refrigerants was carried out according to the following generic reactions:

The first synthetic refrigerants were produced between 1928 and 1930 when General Motors commissioned scientists Thomas Midgley, Charles Kettering and Albert Henne to search for non-toxic and non-flammable refrigerants; and so it is that through chemical reactions of synthesis they obtained the CCl2F2 (CFC-12 or R-12) that was immediately produced and marketed by the company DuPont. A short time later in 1932 they obtained the CClF3 (CFC-11 or R-11) and by 1935 they obtained the CHClF2 (HCFC-22 or R-22), all of them with synthesis reactions from METHANE (CH4).

They quickly replaced the highly toxic SO2 (sulphur dioxide anhydride) and CH3Cl (methyl chloride) used in refrigeration machines. Its good physicochemical properties (great chemical stability, zero toxicity to living beings, zero flammability and not being corrosive) meant that at that time new compounds were synthesized and other applications were developed for: cleaning agents, foaming agents, propellants, extinction agents, solvents and medical applications. Until the early 70s the production of these compounds practically doubled every 5 years.

Unfortunately over time it was seen that synthetic refrigerants caused damage to the environment so the use of CFCs and HCFCs had to be phased out and/or reduced in compliance with the program proposed by the Montreal Protocol (1987-1989). This Protocol sought to curb the increasing damage to the ozone layer that was occurring and regulated the use of refrigerants that had a high ozone depletion potential (ODP), which included both CFCs and HCFCs.

That is why manufacturers looked for new refrigerants to replace CFCs and HCFCs. Between 1989 and 1990 they found HFCs that do not contain chlorine in their molecules. They are also obtained by synthesis; among others are ch2F2 or R-32 achieved from METHANE (C2H6), C2H2F4 or R-134a and C2HF5 or R-125 both achieved from ETHANE (C2H6). HFCs have no impact on the ozone layer (ODP = 0), while maintaining zero and low levels of flammability of synthetic refrigerants.

HFCs are still used, however, their use is now also being regulated through the Kyoto Protocol and the Kigali Amendment (2016) because they have a high global warming potential (GWP) and contribute to global warming. A timetable for its elimination has already been established. Since 2010 we began to look for new synthetic refrigerants that have ODP = 0 and at the same time GWP as low as possible. The synthesis processes were based on the molecules of PROPENE or PROPYLENE (CH2 = CH - CH3 or R-1270) which is an unsaturated hydrocarbon that is characterized by having a double bond of Carbon, achieving molecules of new refrigerants that were called HYDRO FLUORO OLEFINS (HFO).

Graphically the molecules have the following characteristics: 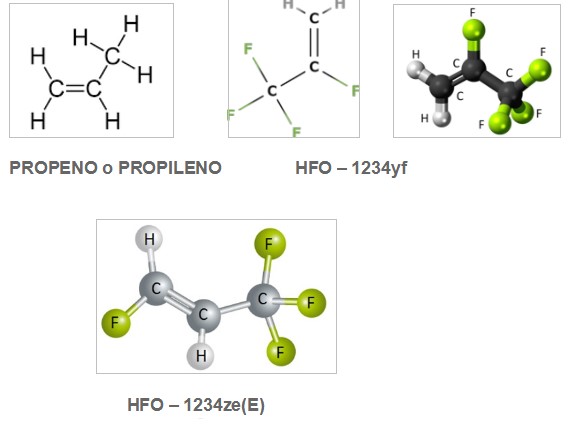 HFOs are double-bonded organic refrigerants with a shorter life if they escape into the atmosphere, so they have less environmental impact, with very low global warming potential (GWP), have high energy efficiency, but are slightly flammable.

For flammability and toxicity, the following classifications have been established: 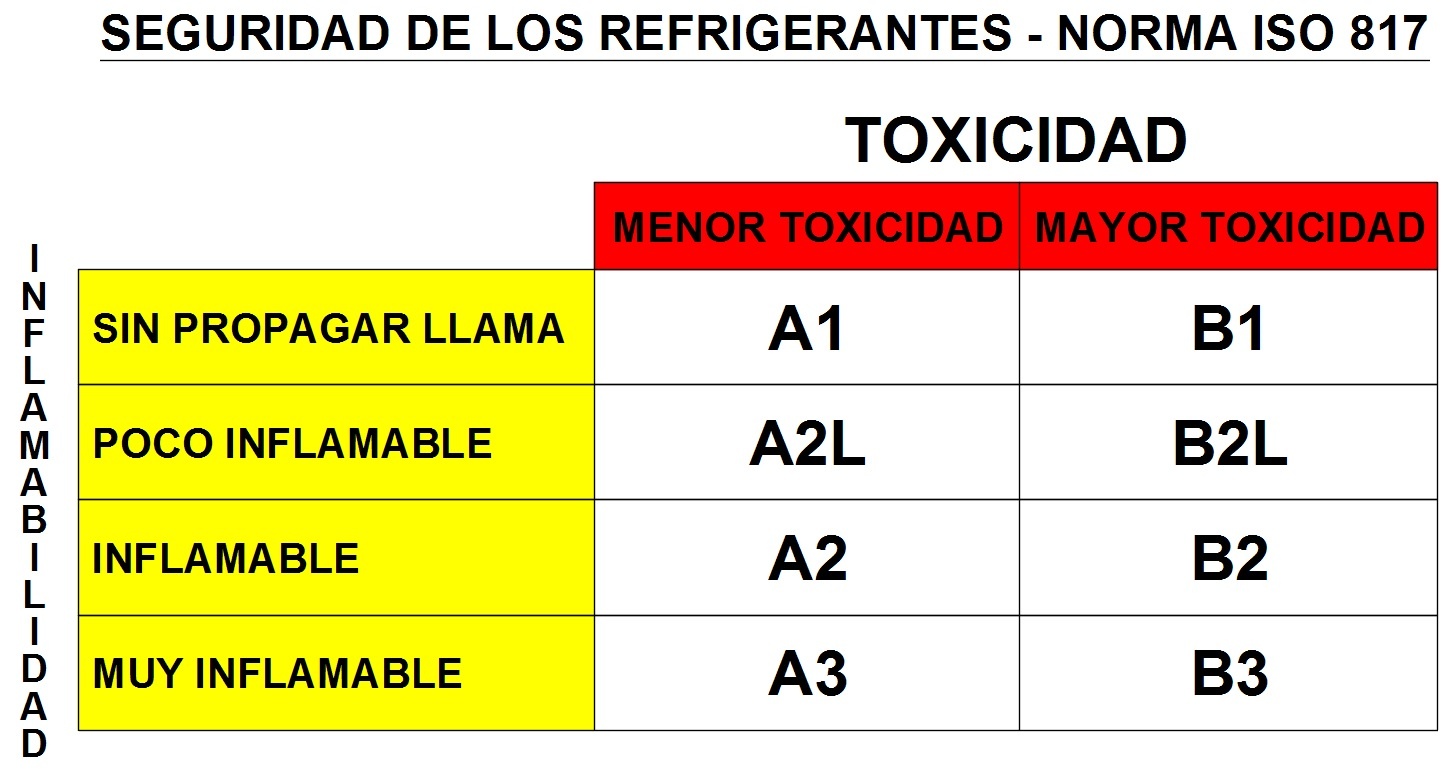 In summary we can say that until now the evolution of synthetic refrigerants has been like this:

Refrigerant mix
Mixtures can be azeotropic when they behave like a pure substance by having their own pressures and saturation temperatures as well as other properties different from their components that gave rise to them and can be non-azeotropic or zeotropic when they are "fractionated", this is observed when they are in their metal container: the vapor phase has a different composition than in the liquid phase that has the desired composition. Therefore, the equipment is loaded with liquid refrigerant when using non-azeotropic mixtures.

Replacement of most common refrigerants
Currently, HCFC-22 or R-22 are still mainly used, which already has a timetable that has been fulfilled for the elimination of HCFCs in 2030. Pure HFCs and mixtures such as R-134a, R-404A, R-507, R-410A are also being used, which have a known timetable to start eliminating all these HFCs, such as: for the countries of Group A5 to which the Latin American countries belong and according to the Kigali Amendment will begin the year 2029.

Meanwhile we are still looking for replacements with the three trends that we have explained and everything seems to indicate that for the future the most promising are natural refrigerants, however the manufacturers of synthetic refrigerants and mixtures have not been left with the "arms crossed" having achieved many and continue to look for refrigerants that do not harm the environment with increasingly lower GWP.

Of the large number of refrigerants, mainly mixtures, we show only a few substitutes: 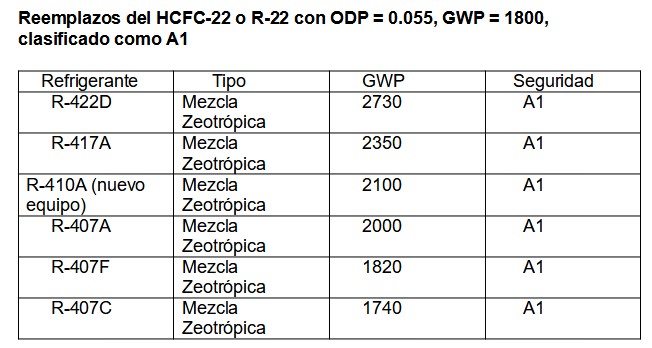 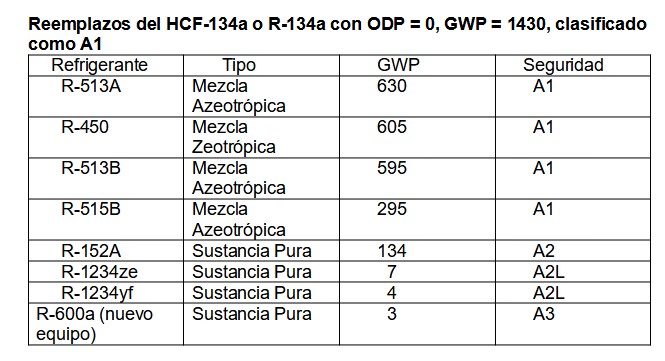 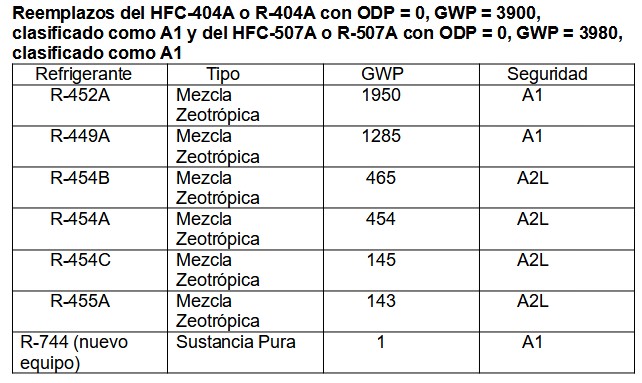 It is important to know because the following scenarios occur:

In refrigeration applications it is necessary to be more careful, analyzing each case, because they work at more varied temperatures (from +15°C to -40°C and even at ultra low temperatures in "cascade" systems) and the capacities of the Condensing Units must be selected/balanced with the Evaporator Units.

In air conditioning applications it is simpler because the equipment works at almost the same evaporation temperature and generally the Condensing Units come balanced with their respective Evaporator Units.

- We repeat that for the future the most promising are natural refrigerants, however manufacturers of synthetic refrigerants and mixtures are still looking for many others that do not harm the environment with increasingly lower GWP.

- For our countries that make up group A5 the gradual elimination of the use of HFC refrigerants is very close, the Kigali Amendment establishes that from the year 2029 the phase-out program begins and we must be prepared to face it. We are helped by the decision of the European Union, which is not governed by the mandates of the Kigali Amendment, because it chose to have its own F-Gas Regulation (EU-517/2014) to eliminate refrigerants with high GWP faster.

The aforementioned restrictions and other prohibitions are forcing not only to use natural refrigerants but to find new pure synthetic refrigerants and / or mixtures that we are using and that surely many others that come in the future our countries will adopt them. 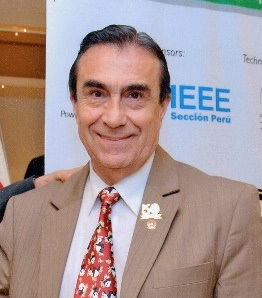 One thought on “Do we have the refrigerants of the future?”