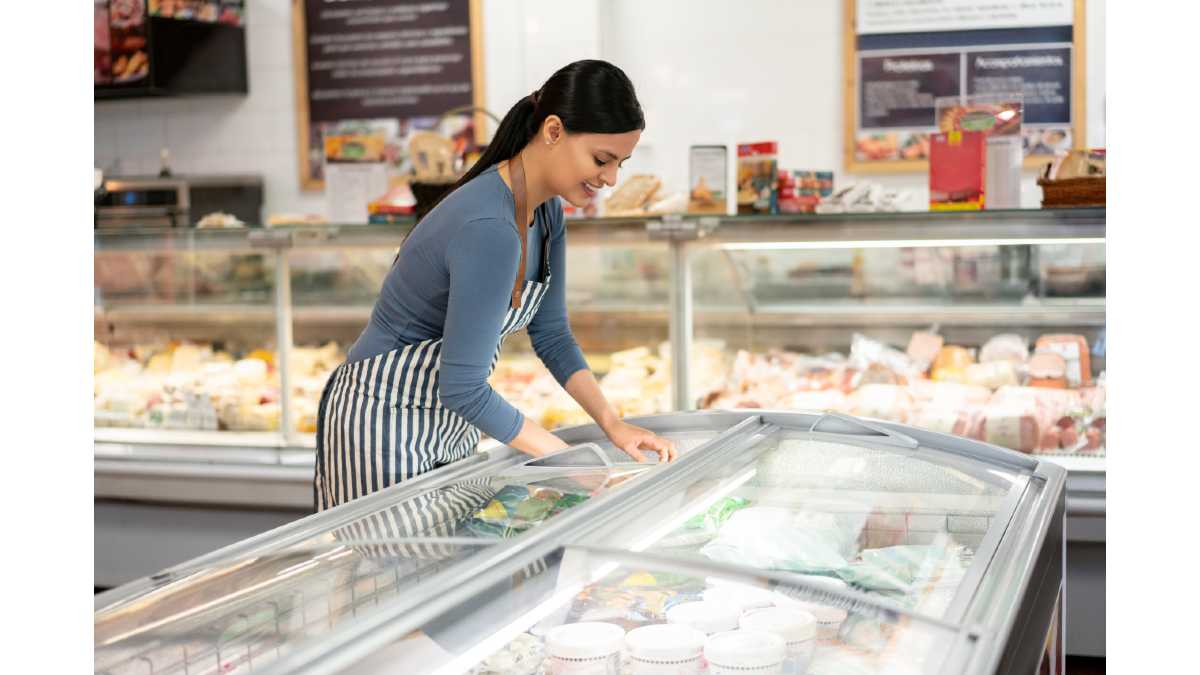 Energy efficiency plays a preponderant role in this class of sectors.

The study shows that improved Transcritical and Subcritical CO2 systems can achieve energy efficiencies, and, cost of living and final cost to users superior to solutions with other refrigerants commonly used in these applications.

The efficiency comparison was made using the specific climate of the location, with a record of 20 years, and the analysis of the climate of the last 10 years, given the influence of current climate change.

The study analyzes the carbon footprint of all proposed systems, on a 20-year basis.

The costs of equipment and facilities are in line with previous experiences in projects of similar capacity.

Inflation and interest benchmarks have been obtained from central bank publications.

For the purposes of the condensation temperature, the climate was analyzed, to determine the temperatures of dry bulb and wet bulb, maximum in the last 20 years, expressed in a period of one year of 8,760 hours.

The R744 (CO2) system will use, according to the climate, an adiabatic evaporative condenser, to work in a subcritical condition; one of the improvement tools used in this cycle.

Systems with Refrigerants: R448a, R404a, will use, in accordance with common practice, in this comparison, air-cooled condensers. A further improvement can be made, making use of the same type of capacitor used for the R744 (CO2).

The climate for location, maximum dry bulb and wet bulb temperatures, in degrees Celsius, for a record of 20 years, are as follows: 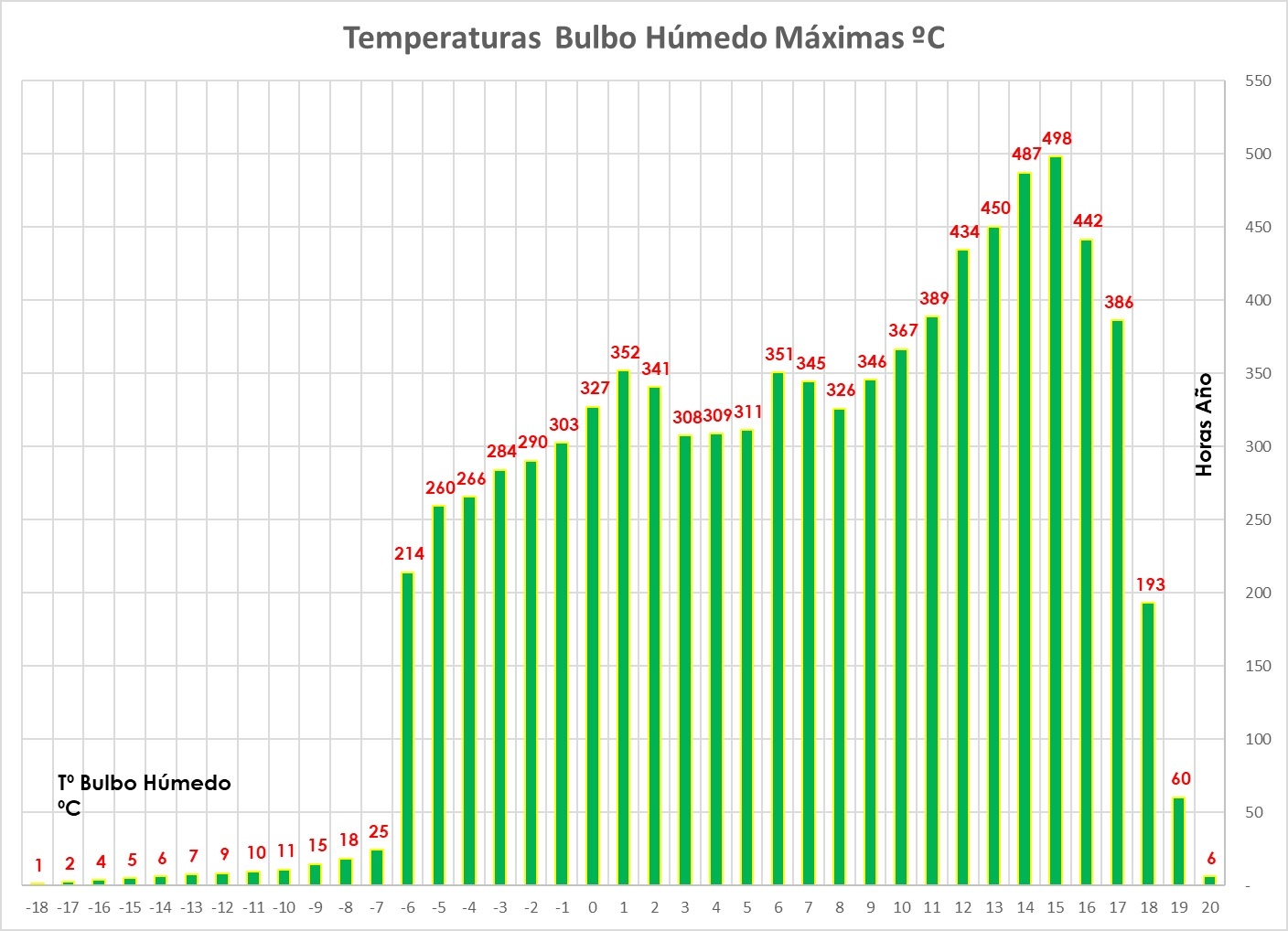 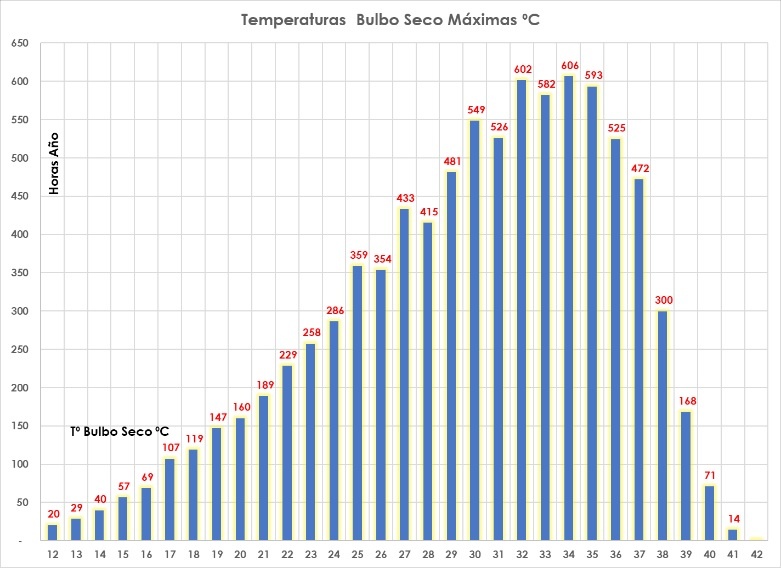 According to the climate, systems with R744 will be operated under subcritical conditions with adiabatic evaporative condensers.

Air-cooled condensers are used for systems with R404a and R449a.

The compressors to be used in the systems, their capacities, and, energy consumption are detailed in the following table: 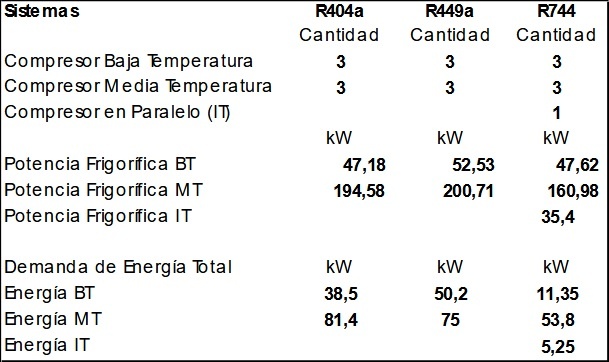 Table 1.
Systems with R404a and R449a refrigerants are conventional systems and share a condenser.

To be competitive, the system with R744 (CO2) must integrate technologies that improve its efficiency, but at the same time increase the cost of the system, in the graph below, the description of the system: 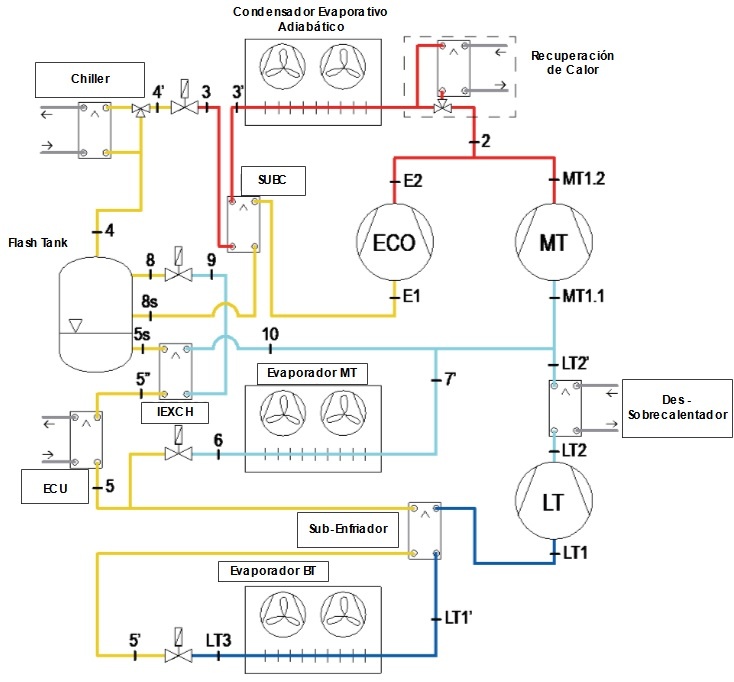 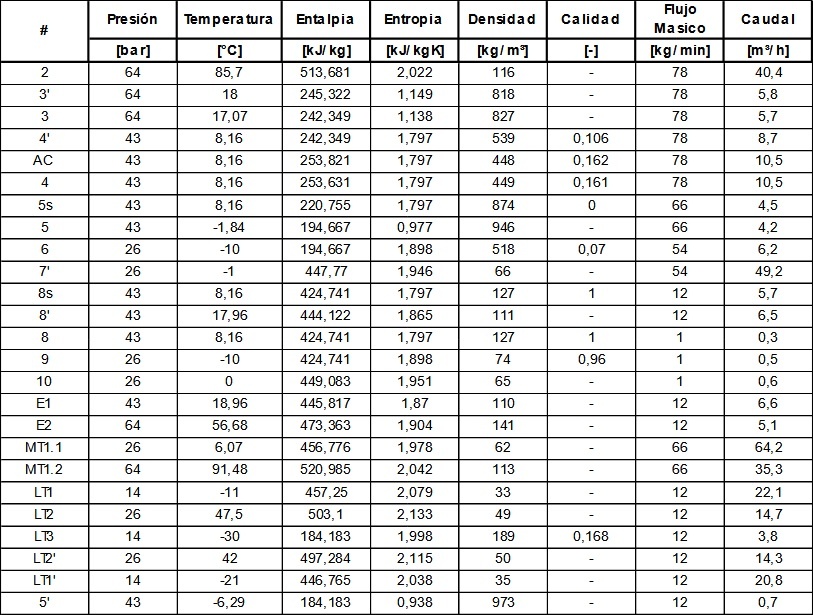 Table 2.
The BIN analysis, for the three systems, 8760 hours per year, simultaneity factor of 0.82, yields the following, annual energy demand, including capacitors.

Table 3.
The initial cost, installation, maintenance, and, operating costs are evaluated at present value, for a useful life of 15 years, and an effective year-on-year interest rate of 0.49%. 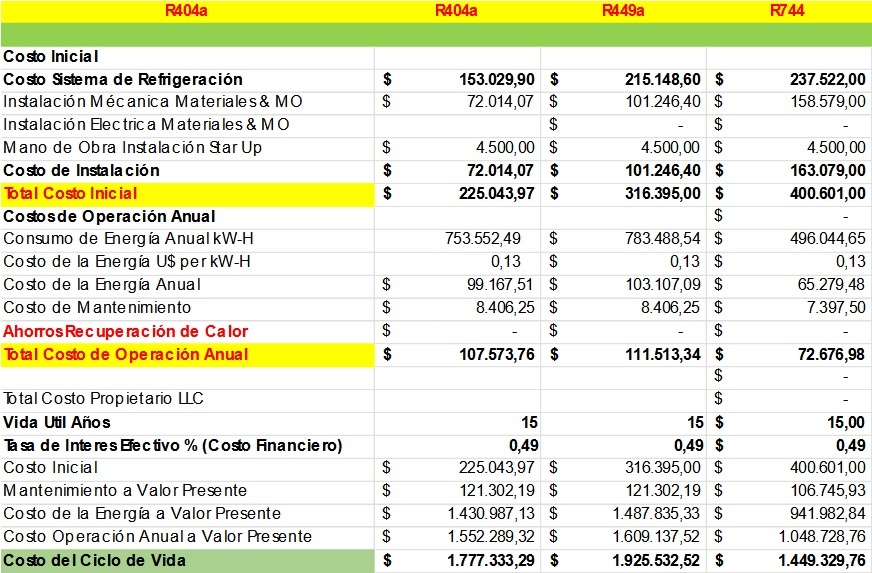 The total costs to the owner, which include energy demand, water consumption, external service assistance, maintenance, and including amortization, are as follows:

The carbon footprint of the three systems, for the specific location and its current conversion standards, the accumulated known statistics of leaks, the initial refrigerant charge and refills is evaluated according to the latest data for these refrigerants, for a period of 20 years.

The R744 Cooling System represents, for these conditions, the best option.

For this to be possible it is necessary to use the tools that thermodynamics provides us, make correct use of them from the study of climate of the hydrography of the location, two resources are basic for this; water and energy.

In general cooling systems with R744, so that their efficiency and costs are competitive, an integrated analysis is required, of greater depth, this type of system will not be more efficient by itself, the designer will establish this difference.

On the other hand, it is a natural refrigerant, which will last over time; improvements can still be incorporated into the system, in the same way the Refrigerants R404a and R449a, can incorporate, for example, the same type of condenser used for R744, and in the present study a subcooling of the liquid at the outlet of the condenser equivalent to 15ºC has been used, for these refrigerants.

The significant reduction of the carbon footprint is another of the variables to consider in terms of decision-making in line, with recent studies of the effects of global warming in the short term, the carbon footprint has been calculated for its effect in 20 years, practice recently proposed by the agencies responsible for the area. 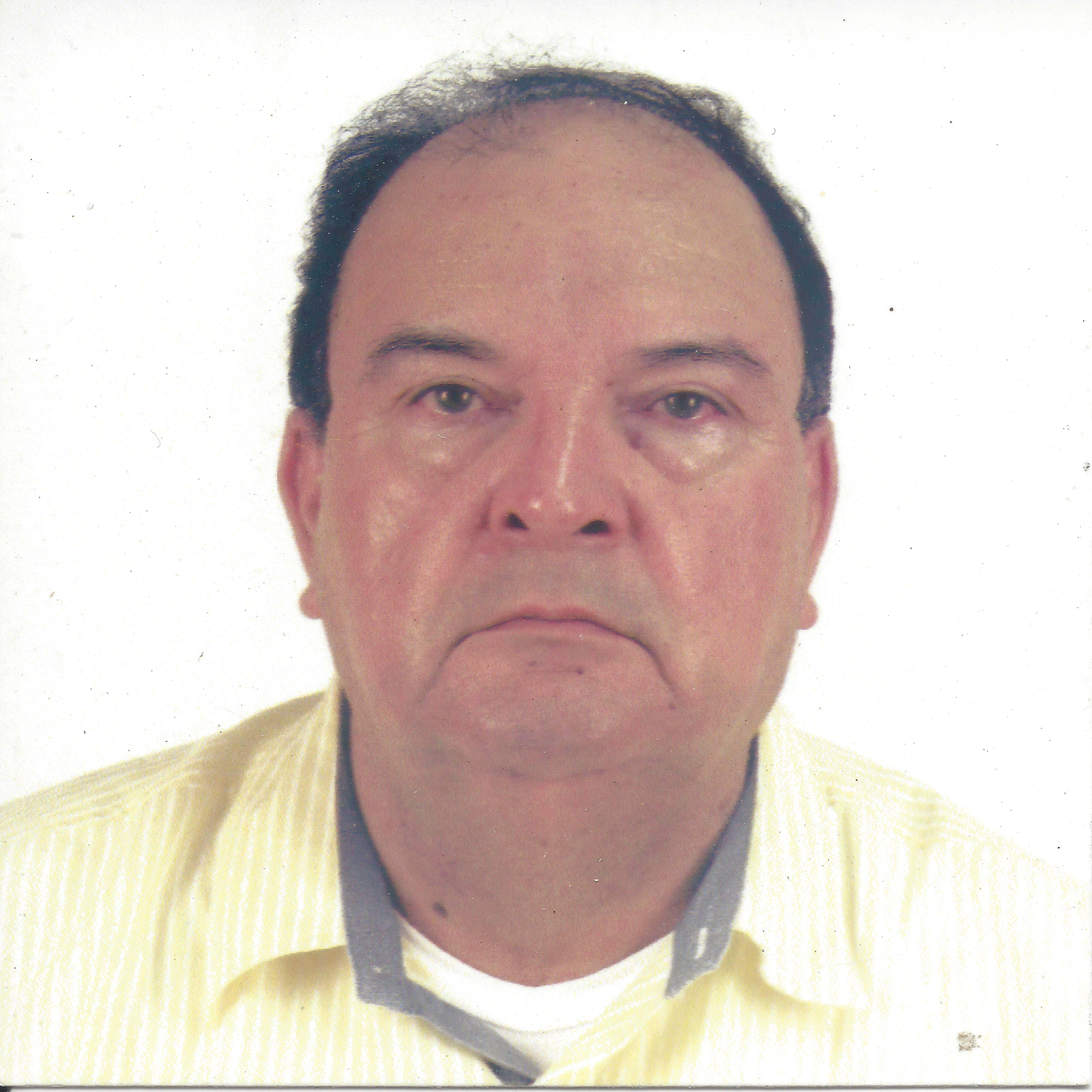 No thoughts on “Comparison of refrigeration systems for a commercial application”