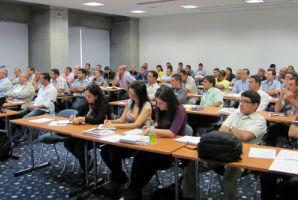 Two days of academic congress and trade show allowed installers, manufacturers and end users to update themselves on refrigeration trends, as well as generate agreements and start negotiations. by Alejandra García

A complete experience in which there were spaces for academic updating, networking and negotiation, as well as to learn about practical experiences of other companies was RefriAméricas 2011 thanks to its program of conferences, commercial exhibition and guided tours. The event that took place on June 16 and 17, at the Plaza Mayor Convention Center in the city of Medellín, Colombia, brought together more than 100 attendees to the academic program, 92 exhibitors and more than 300 visitors. Training and updating
Willian Morales Quispe, general manager of Servicios Reter ERL and one of the keynote speakers of the academic day, spoke with us about the importance of training spaces for the development of the industry. In that sense, the guest said that "professionals make a mistake: we fossilize; we reach a level of knowledge where we stagnate and do not want to move forward because every new study represents effort. But today if we are not updated little can be done with the new machinery and technologies that come to the region and that change almost every year." Likewise, he stressed that training is a fundamental component for improvement: "If we want Latin America to reach a higher level of development, education is indispensable," he said. Morales Quispe also highlighted the importance of working on improving the level of energy efficiency of refrigeration equipment. He pointed out that although the process is slow, there is already a desire and a willingness of the industry to invest in that field, although he pointed out that this process is an obligation for the quality standards that are demanded today. Precisely during his conference on good practices, Quispe highlighted the responsibility that the industry has with the environment. He stressed that the quality of the equipment, the good maintenance and, in general, the care that the technical staff applies can help to have more efficient devices minimizing their polluting effects.  "The end user makes the mistake of demanding more from the machine than it should, forcing lower temperatures, using them at a higher capacity than recommended, and other practices that force the team out of its design ideal point, consuming more energy and therefore generating more pollution. As technicians and refrigerators we must think about what can I do to make the machine work in optimal conditions?" he said. Similarly, Miguel Ángel Rodríguez, technical director of the Spanish company Frisaqués S.L., spoke at his conference on this topic; in his opinion "the different factors that affect the search for energy savings must be considered from the point of view of design and before executing the installation; it is important because with a good design you can obtain savings of 10% to 20% per year," he said.

Contacts, business and positioning
Rodríguez also shared the objectives that Frisaqués S.L. hoped to achieve with his presence at the RefriAméricas 2011 commercial exhibition. First, make commercial contacts with installation companies, to address projects in Latin America that smaller companies in the region are not carrying out. They specialize in the assembly of large refrigeration plants and aim to collaborate with local companies in the construction of industrial plants. Rodriguez also spoke about his interest in the Latin market: "It is important for us because it is an area where there is still sustained growth, while in Europe, right now, the situation is more complicated." Likewise, Rodnei Peres, Foreign Trade Manager of Full Gauge Controls, stressed that the profile of the fair, which includes installers, final consumers and students, allows them to approach three audiences that are very important from the point of view of institutional positioning. The official also highlighted the growth of the Colombian market. "There is a lot of talk about Brazil, but for me Colombia is a playground, the investment and the projects that are being developed mark a growth trend in the country. In Full Gauge in particular, we have increased our brand presence with distributors in the main cities of the country, due to the growth that the Colombian market has had," said Peres. For his part, Juan Carlos Yepes, Project Manager of Sutrak S.A., indicated that "the refrigeration sector in Colombia has grown both technically and economically, I would think that more technically because every time users know more about the state of technology, as well as the options that exist in the market to be able to meet their needs". Exchange of experiences
There is no better method of learning than the experience itself, so this year RefriAméricas proposed to give the opportunity to attendees to learn about the refrigeration practices of renowned companies belonging to different industrial sectors. In total, about 50 people participated in the three guided tours scheduled for Wednesday, June 15. Flores Sayonara, Helados Mimo's and the Central Ganadera were the venues visited by some of the first enrolled in RefriAmericas. At the Mimo's Ice Cream plant, the talk was led by Henry Cuervo, head of maintenance of the organization, who explained that they use two refrigeration systems, one of freon to support the cellars and another of ammonia for the blenders, "we use ammonia because it works much higher evaporation conditions that make it ideal for the temperature of ice cream," he said. Among the places included in the tour are: the pasteurization area, laboratory, ice cream mixers and the machine room where evaporative condensers and ammonia compressors are located under a flooded system. Those attending these visits were very satisfied. Olga Lucía Rozo, production director of Avidesa de Occidente - Macpollo, was one of the attendees of the tour and pointed out that "it is very positive to have access to these technical visits because it allows us to exchange ideas with professionals from the same branch and look at other successful companies how they are managing their cold chain". Another of the tours was made through the refrigerator and the beneficiation plant of the Antioquia Livestock Power Plant, in which the processes of slaughter and refrigeration of meat were known. Álvaro Ramírez, the company's refrigerator, shared, with the advice of the coordinators of each area, the methods of controlling the temperature of the channel during processing and conservation.

No thoughts on “Business, contacts and experiences at RefriAméricas 2011”